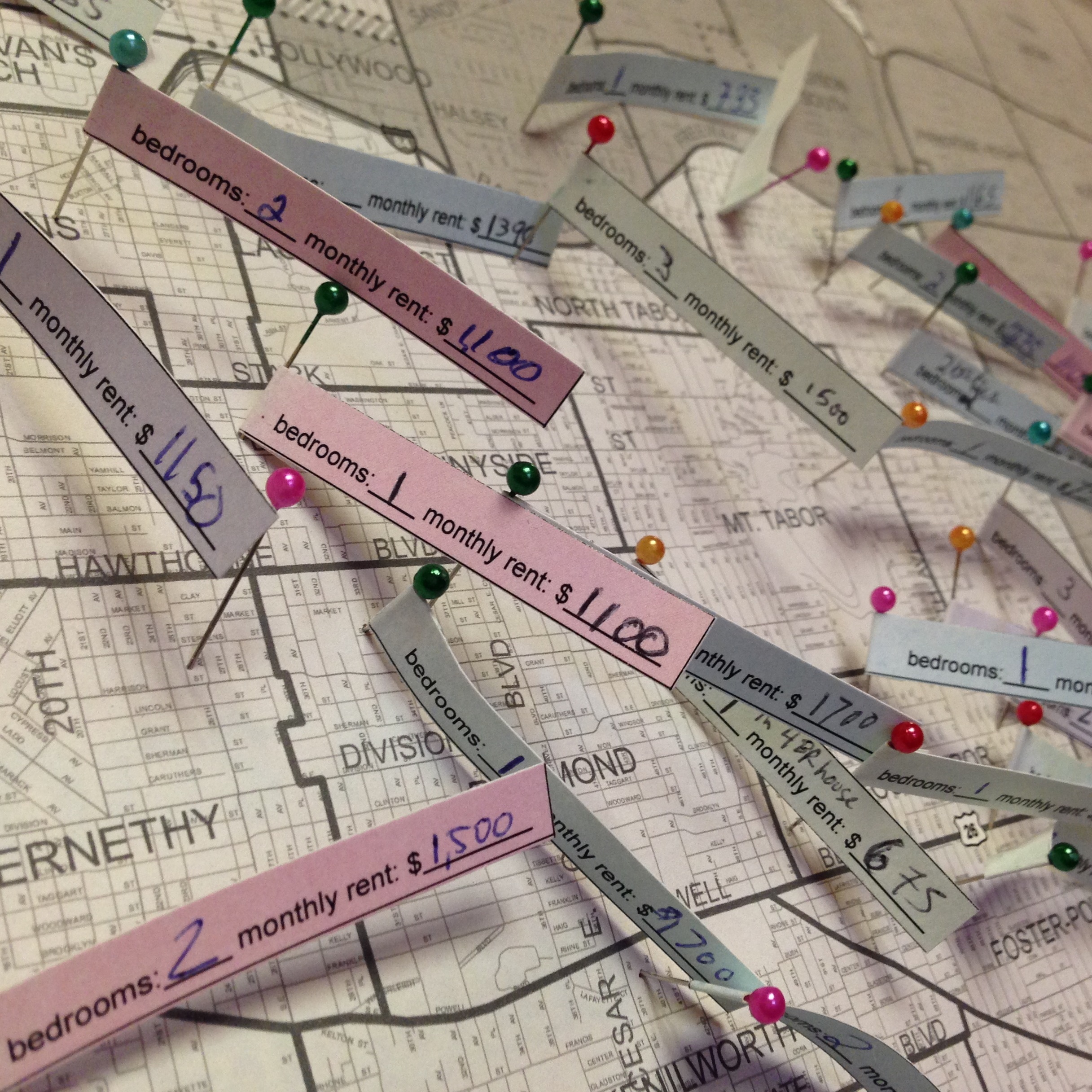 This past month, SE Uplift partnered with the Community Alliance of Tenants (CAT) and Portland Tenants United to table at the Jade Night Market and Belmont Street Fair. CAT provided specialists to engage event-goers in a live Renters’ Rights dialogue about rights and responsibilities of renters and landlords. We also invited community members to participate in Vent Your Rent, a mapping activity where participants pinned their monthly rent to an oversized map of Portland.

SE Uplift staff and board members loved hearing directly from renters and landlords about some of the challenges they are facing – finding homes and offering safe and stable places to live.

Our partnership with CAT and Portland Tenants United also provided us the opportunity to learn more about what various housing advocates are working on right now in Portland. As current state laws limit the policies Portland and other Oregon cities can use to address housing affordability, it appears that most current housing advocacy is directed towards making changes via the state legislature.

Housing Advocacy Groups Are Gearing Up For the 2017 Legislative Session

Two issues that community members can expect to see addressed in Salem during the next session are evictions and rent stabilization, with the hope of housing advocates that putting some restrictions in place may help prevent displacement. It goes without saying that any regulation on housing is always controversial and a source of heated debate, particularly rent stabilization policies. 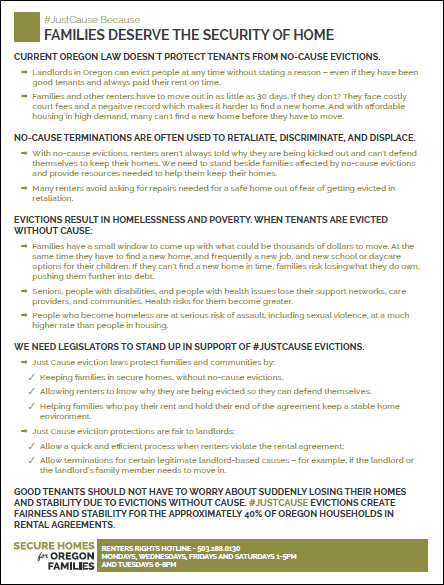 In Oregon, landlords can boot tenants even if they have not violated their rental agreement and have been paying their rent on time. Landlords don’t have to give a reason for the eviction (called a “no-cause” eviction), as long as they provide the proper notice. Tenants and housing rights advocates argue that no-cause evictions provide easy cover for retaliation and discrimination by landlords. Additionally, no-cause evictions have increasingly been used to clear out entire buildings in Portland in order to replace them with higher-paying tenants, sometimes more than doubling the rent.

Local shelter providers say that evictions have become one of the leading causes of first-time homelessness. Additionally, recent studies have found that the sudden loss of a home due to eviction or rent increases is not only more frequent for those living in poverty, but can actually be a cause of poverty.

In response, tenants and advocates are pushing for the legislature to enact a “just-cause” eviction policy, potentially similar to Seattle’s, which only allows landlords to evict a tenant for one of 18 specific reasons listed in code.

Although it will be a heavy lift, there are signs that advocates could be successful this year in their fight for regulations to govern just-cause evictions. One such sign is the range of organizations that have coalesced around, or endorsed the effort, including Community Alliance of Tenants, Portland Tenants United, Unite Oregon, Asian Pacific American Network of Oregon, Oregon Housing Alliance, Oregon Opportunity Network, and the City Club of Portland. This, combined with mayor-elect Ted Wheeler’s campaign promise to enact a just-cause eviction requirement in Portland once he takes office despite likely legal challenges, and the issue’s positive portrayal in the media have created forward momentum for the campaign. If successful, a just-cause eviction statute could help protect tenants from the devastating consequences of suddenly losing their homes.

Advocates argue that ending the ban would allow Portland and other local governments to engage with all stakeholders and consider policies ranging from significantly increasing the notification period for rent increases to more traditional forms of rent stabilization which usually work by setting limits on how much a landlord can raise rents. The key thing to note is that most housing advocacy groups are seeking local flexibility, rather than a statewide cap on rent.

Oregon House Speaker Tina Kotek recently announced her support for overturning the state’s ban on rent stabilization. But the policy change is far from a slam dunk. The campaign faces formidable opposition from organizations with strong lobbying arms, including Multifamily NW and Oregon Rental Housing Alliance.

While SE Uplift’s Board of Directors has not taken a position on either of these matters, we are always excited to see historically disenfranchised groups in our community harnessing their voices and engaging in our political and civic system. We look forward to continuing to support the work of all the organizations working to improve the current lives and future fortunes of our city, regardless of policy positions.

If you are interested in plugging into either of these efforts, join the Community Alliance of Tenants at their Renter Day of Action Campaign Launch on September 22nd.