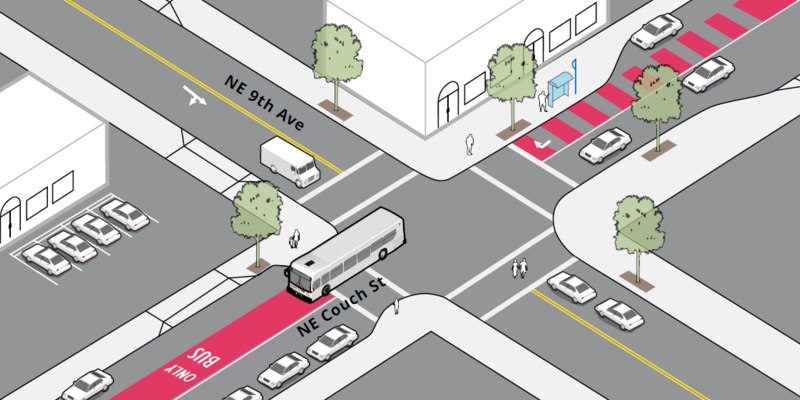 Construction impacts will continue through August and include intermittent lane closures, parking restrictions and traffic delays

(July 29, 2022) – The Portland Bureau of Transportation (PBOT) begins construction next week on two new projects – the NE Couch Rose Lane Project and the NE/SE 7th Avenue Neighborhood Greenway Project. Each project will add connections to the Congressman Earl Blumenauer Bicycle and Pedestrian Bridge following its opening on July 31. Construction is expected to last through the end of August.

This Rose Lane Project will improve speed and reliability for bus riders of TriMet lines 12, 19, and 20. Construction will begin at NE 12th Avenue and will continue for about three weekends as crews work their way west to NE 6th Avenue.

PBOT will provide a bus-and-turn (BAT) lane on NE Couch Street between NE 12th and 6th avenues. The BAT lane will improve transit speed and reliability for bus riders on lines 12, 19, and 20.

In addition, PBOT will improve the bicycle connection to the Congressman Earl Blumenauer Bicycle and Pedestrian Bridge by extending the bike lane from 6th to 7th avenues. People biking will also be allowed to use BAT lane between NE 12th and 7th avenues.

This project also includes a general travel lane reallocation and one block of parking removal. The right travel lane will be reallocated between NE 6th and 12th avenues for the bus-and-turn lane. People driving will still be able to use the lane to make right turns at driveways and at intersections and to access on-street parking. Parking along the north side of NE Couch Street between NE 6th and 7th avenues will be removed.

This Central City in Motion project will create a new, half-mile long north/south bike connection on NE/SE 7th Avenue between SE Washington Street and the new Blumenauer Bicycle and Pedestrian Bridge. In addition, PBOT will install a new westbound bike lane on the north side of SE Washington Street.

Visibility and crossing safety will be improved by removing parking near intersections. In addition, parking will be removed on the north side of SE Washington between SE Sandy and 8th Avenue.

The project will result in improved safety for people walking and bicycling and a stronger connection between the Central Eastside and Lloyd neighborhoods. People are invited to reimagine the future of 7th Avenue during the Blumenauer Bridge opening celebration July 31. The community group Depave, which focuses on transforming concrete areas into green spaces, will be hosting a block party at 7th Avenue and Sandy at 3 pm to demonstrate how this location could be used as a future community gathering space.

The traveling public is advised to expect delays while repairs are being made. We ask the public to travel slowly and cautiously in work zones, observe all detours and directions by reader boards and flaggers, and use alternate routes if possible.

Expect dust, noise, vibrations, and heavy equipment near work zones.  As always, please keep crews safe by following all traffic control signs and flaggers while travelling through or near work zones.

Parking will be restricted 1 to 2 days before crews begin construction.

This work is weather-dependent, and the schedule may change.

PBOT will provide periodic updates throughout construction. To sign up for construction updates, visit portland.gov/necouch.

Thank you for your cooperation and patience while we complete this work.

The City of Portland complies with all non‐discrimination, Civil Rights laws including Civil Rights Title VI and ADA Title II. To help ensure equal access to City programs, services and activities, the City of Portland will reasonably modify policies/procedures and provide auxiliary aids/services to persons with disabilities. Call 503-823-5185, TTY 503-823-6868 or Oregon Relay Service: 711 with such requests.

Lindsey Johnson
Lindsey joined the staff team at SE Uplift in 2021 as Administrative and Operations Specialist. She is excited to move into communications and fiscal sponsorship.
Lindsey has served on the board for Montavilla Neighborhood Association and SE Uplift. She has an extensive background in the nonprofit arts and education sectors. She is passionate about building community and supporting local businesses.
Lindsey hails from Minneapolis and has been living in East Portland since 2016. She earned music degrees from Luther College and the University of North Texas. Lindsey performs with the Portland Opera Chorus, serves on the Board of Governors for the American Guild of Musical Artists (AGMA) labor union, and is President of the Mu Phi Epsilon Portland Alumni Chapter. In her spare time, she enjoys board games, hiking, mushroom foraging, and cuddling her puppy and two cats.
Lindsey is the SE Uplift Liaison for the following neighborhoods: Ardenwald-Johnson Creek, Laurelhurst, Montavilla, Mt. Tabor, and Sellwood-Moreland.
Nanci Champlin