The Changing Role of Maps 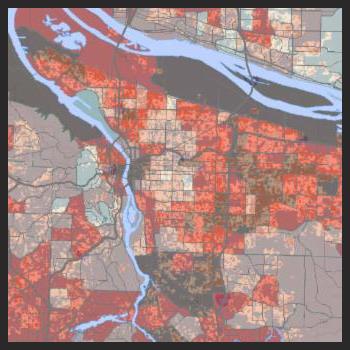 If you are a parent of children of a certain age or perhaps if you are a person who grew up during a certain era, you might be familiar with the character Map who appears in the children’s show Dora the Explorer. Each episode, Map helps Dora figure out how to get to where she wants to go. It is a good lesson – if you don’t know where you are going, look for help.

It is funny to think that the current generation of toddlers watching this show will probably rarely consult a physical map as they get older.  In an age of smartphones and GPS systems, paper maps, with their delightful folds and creases, are more likely to be used as party hats than as navigational tools.

Even as paper maps are becoming obsolete, the power and importance of mapping is ever increasing. You don’t need to look far to see this trend playing out.

Earlier this year, the Coalition for Livable Future released the second version of its Regional Equity Atlas. The first version released in 2007 was a book with static maps. The new addition is online and interactive. The tool enables anyone with an internet connection to visually see and map the various opportunities, resources, and inequities that exist from neighborhood to neighborhood and from city to city in our region. There is power in who creates maps and how they are created. The Regional Equity Atlas democratizes this power so that everyone can use the data that is available to tell their story.

Maps are also increasingly being used as a tool to solicit ideas and feedback. We all know that traditional forms of public involvement that include things like open houses and advisory committees often fall short of their noble goal of engaging citizens in decisions about their community’s future. Mapping tools are unlikely to replace the traditional methods, but they are starting to become an additional avenue to gather input from people and groups that may not have the time or inclination to show up at a meeting.

For example, the Bureau of Planning and Sustainability has created a Map App as part of its process of updating the City’s Comprehensive Plan. The Map App allows you to see how city staff project Portland will grow and change over the next 20 years. More importantly, it offers you the ability to comment directly onto a map about what you do and don’t want to see – from the comfort of your own home at a time that works for you. You can also see all the comments that other people have made on the map.

As technology continues to evolve and to become more accessible to more people, we can expect that maps will be used in new ways to help the Dora in all of us.

Bob Kellett is the Neighborhood Planning Program Manager at SE Uplift. He can be reached at (503) 232-0010 ext. 314 or bob@southeastuplift.org
Phoebe Gildea