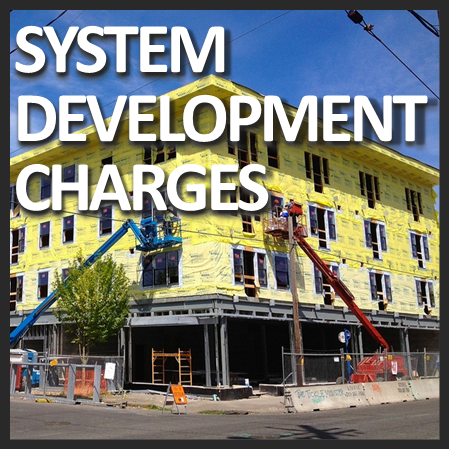 A new multistory mixed use building is constructed in your neighborhood. The building has a physical imprint, but what other impacts does it have on an area? Additional people and businesses can lead to increased vibrancy and boost nearby businesses. Increased activity can generate more car trips, as well as more people biking and walking. New residences and businesses mean new toilets and showers, with new demands on water pipes and sewers. More people can lead to increased activity in nearby parks.

Positive or negative or a little bit of both, new development does have an impact on the systems we collectively share. One way cities like Portland try to account for those impacts is through system development charges (SDCs). These are one-time charges levied on new development or when there is a change in use at an existing site to recover all or part of the cost of building infrastructure to serve that development.

How does this work, how much do the SDCs cost, and how are the fees spent?

Let’s take two sample developments. The first is a new single family home. The second is a new 50-unit apartment building. Both developments are required to pay SDCs to four city bureaus: Bureau of Environmental Service (BES), Portland Bureau of Transportation (PBOT), Portland Parks and Recreation (PP&R), and Portland Water Bureau (PWB). Each bureau tries to capture the impact of development or new uses by charging rates based on the number of housing units and/or the type of activity the development will generate.

Using the rates provided by the city, here is a very rough estimate of what these fees might look like for our two sample developments:

The fees are paid at the time the building permit is acquired. Now how is the money spent? State law mandates that SDCs must be spent on capital projects. They can’t be used to fund operations or maintenance.

Where does the money go?

Let’s break it down by city bureau:

Bureau of Environmental Services: SDCs are used to pay for new sewer connections to a property. Charges are also applied to mitigate stormwater runoff from the property. For commercial, industrial, and multi-family residential developments, charges are based on the amount of impervious surface on the property.

Portland Water Bureau: SDCs are charged when a property owner applies for a new water connection or to increase the size of an existing connection. The money that is collected is dedicated to existing and future capacity enhancing capital improvements like bigger pipes, improvements to reservoirs, etc.

Portland Bureau of Transportation: SDCs are charged to build more capacity in the city’s transportation system to accommodate growth-related trips and projected job/population growth. The money that is collected is spent on a list of transportation projects that is updated every 10 years. The most recent list was adopted in 2007. It includes projects like the 50s Bikeway, the Burnside/Couch couplet, and the eastside streetcar. In its 2014-15 budget, PBOT budgeted for $20.8 million in SDCs revenue with the money dedicated to projects on its project list including improvements to streets and sidewalks to support the Portland-Milwaukie light rail and multi-modal improvements on NE Glisan.

Portland Parks and Recreation: SDCs are collected to pay for the acquisition of land, as well as the development and restoration of parks, natural areas and trails. This ranges from paying for the installation of new synthetic sports turf at existing parks to developing new parks. In 2012-13, PP&R collected nearly $15 million in SDCs revenue with money spent on projects like constructing the South Waterfront Greenway, a protective bubble over the Portland Tennis Center, and improvements to Ivon Park.

PP&R updates its SDCs methodology every five years. An update is currently underway with a City Council hearing scheduled for April 15. The current proposal recognizes that acquisition of land for new parks is increasingly difficult because of land costs, and instead would direct more SDCs to investing in the capacity of existing parks.

System Development Charges are an important source of funding for Portland’s infrastructure, helping to pay for roads, sidewalks, bike lanes, trails, parks, and pipes. They are also used as a policy tool to encourage certain types of development or to spur development in certain areas. For example, for the past few years SDCs have been waived when properties develop Accessory Development Units (ADUs). In an effort to spur development of middle income housing in Old Town/Chinatown, up to $7 million in SDCs will be waived. Exemptions are also sometimes offered for development of affordable housing.

SDCs aren’t without criticism. Some developers complain about the high cost of doing business in Portland – costs that are often passed on in the form of higher residential and commercial rents. Neighbors I work with sometimes complain that the money collected from development in their neighborhoods is being spent on parks and roads that are in other parts of the city. Some people have argued that in a city that faces financial challenge maintaining and operating its current infrastructure, limiting SDCs expenditures to capital projects is shortsighted. It also isn’t easy to find information about how much money each revenue collects in SDCs and where that money has been spent each year.

With Portland expected to continue to see growth for at least the next couple of decades, concerns about fee structures and how and where money is spent should remain part of our civic dialogue. Now is the time to weigh in on the Parks SDCs – you can learn more about it at the March 16 SE Uplift Land Use and Transportation meeting. The next opportunity to weigh in on PBOT’s SDCs will be in 2017.