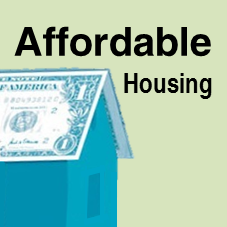 Mayor Charlie Hales recently made headlines with a proposal that the city allow small houses to be built on government owned land in an effort to increase affordable housing options. Hales’ outside-the-box idea reflects a couple of realities. The first is that housing affordability continues to erode in Portland. The second is that the city’s current set of tools to promote and develop affordable housing is not sufficient to meet growing demands. 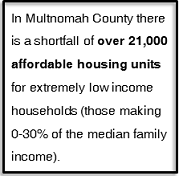 The challenge of housing affordability is not specific to Portland, of course. All one needs to do is to look to our neighbors to the north in Seattle and our neighbors to the south in San Francisco to see that the cost of housing in cities on the west coast, and many large cities throughout the US, is on the rise. This is especially true in neighborhoods that are close to the downtown core like many of the neighborhoods in the SE Uplift coalition area.

Portland’s inner city neighborhoods are becoming less accessible to people from all income levels. Many fear that if we continue down the current path, the neighborhoods we live in will soon be exclusively the province of the wealthy. This loss of income diversity hurts everyone (see last month’s newsletter article Do Renters Matter?).

So what can be done about it? The reality is that in a society in which market forces drive housing prices, there isn’t a magic bullet solution to assure that people at the lower end of the income spectrum can afford to live everywhere in the city. We know from experience that the market alone won’t provide affordable housing in all areas. We also know that it will take citizen advocacy and strong political leadership for the city to enact new policies aimed at maintaining and increasing affordable housing.

With this article we take a look at what programs and policies Portland (and its varied partners) currently has to address affordable housing needs. Then we look at some approaches other cities across the country are taking.

The second program is the Multiple-Unit Limited Tax Exemption (MULTE), which offers a similar ten-year tax break to owners of buildings such as apartments that meet certain affordable housing thresholds.  In 2012-13, there were 663 units qualified for MULTE.

The third program is the Non-Profit Low Income Limited Tax Exemption (NPTLE), which provides a property tax exemption for low-income housing owned by nonprofit organizations. In 2012-13, there were 9,579 units that received NPLTE exemptions.

Other Cities’ Program and Policies

These are just a few of the tools that cities are using as they try to tackle the large, complex issue of affordable housing. I don’t claim to be an expert in this area so I’d welcome your thoughts and ideas. Shoot me an email – bob@seuplift.org – or give me a call at (503) 232-0010 ext. 314.