WHEN DINOSAURS COME TO SE PORTLAND 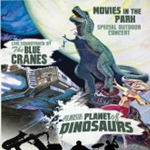 On Saturday, August 17 the Richmond Neighborhood Association, in partnership with the Sunnyside and Hosford-Abernethy Neighborhood Associations, Portland Parks & Recreation, Portland Parks Foundation, and Filmusik, will present PLANET OF DINOSAURS, a free outdoor movie and community event in Sewallcrest Park (SE Market and 32nd Ave).  A new score will accompany the film LIVE. All of the fantastically bad B-movie dialog, music, and sounds for the film will be performed in front of a live audience by voice actors from the Willamette Radio Workshop, sound effects artists, and local jazz band the Blue Cranes.

If live music, dialogue and sound effects aren’t enough to blow your mind, there will also be a special attraction: a mini-dinosaur zoo, provided by Mr. Lizard’s Mobile Reptile Zoo! The film begins at dusk (approximately 8:30), but be sure to get there early – this is a popular event. There will be a raffle and food carts a-plenty.

Planet of Dinosaurs is part of the City’s Summer Movies in the Parks program.  The event is funded in part by a grant from the Multnomah County Cultural Coalition and Oregon Cultural Trust. To donate to this amazing show and help it remain an annual event, visit portlandpf.org for the “Sewallcrest (Richmond) Planet of Dinosaurs by Filmusik” movie and receive an exclusive Columbia Sportswear 30% discount through the Portland Parks Foundation.

You’re not going to want to miss the spectacle that is PLANET OF DINOSAURS!