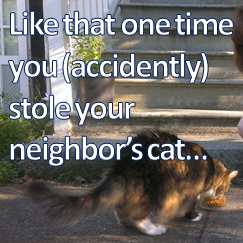 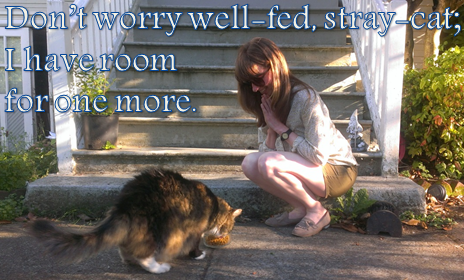 Let’s be honest, interactions with neighbors are often heart-warming and fun, but sometimes they take a darker turn… As in, awkward, uncomfortable and downright embarrassing – like the time you “adopted” your neighbor’s cat thinking it was a stray.

They can also be harrowing, full of adventure and mind-boggling. Sometimes our neighbors surprise us – maybe the eccentric hoarder is also a renowned violinist or the alleged vodka-drinking-grandma is just making soap.

We’re willing to bet, though your intuition is spot-on some of the time, that you’ve jumped at least once to a premature (er, wildly wrong?) judgment about a neighbor. And, in the process could your misconception have become the nugget of truth fueling another neighbor’s conspiracy theories about your family?

Knock, Knock! It’s Your Neighbor is an opportunity to get your story about the folks next-door out in the open and off your chest. We want to hear your mistakes of neighborly proportions; your true tales of misadventure, mishap and misconception during our open-call auditions (think interviews – no prior telling experience needed)! Join us July 12 from 10-2 or July 22 from 2-6 at Helium Comedy Club for a chance to take the stage on September 24th for our second annual Knock, Knock! it’s your neighbor storytelling extravaganza.

If you answer ‘yes’ to – or are inspired by – any of the following statements, we’re looking to you as a potential Knock, Knock! Storyteller.

After putting your most beloved garden treasures away for the winter, and promptly forgetting you’ve done so, you accuse your neighbors of grand larceny – not once, but repeatedly.

Based on the loud thuds at all hours of the night and his consistent absence, you are convinced your upstairs neighbor is an undercover spy with an exercise addiction – in truth, you discover, he only works for Nike and is a regular nice guy.

Upon hearing footsteps in the wee hours of the morning, and with grand illusions of being the neighborhood hero, you call the cops on your neighbors just as they’ve returned home, exhausted, from South America.

You have noticed countless numbers of dogs are seen next door only once, and then never to be again. You’re sure it’s an illegal pet-trafficking operation… only to later learn your neighbors foster animals and have no criminal connections (at least that you can learn of via the internet).