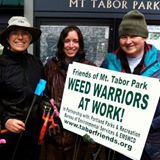 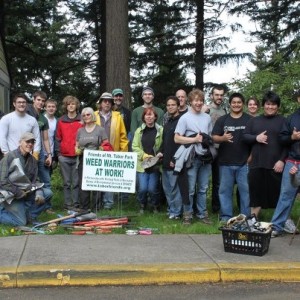 On the last Saturday of the month (March – October), come rain or shine, between nine and eighty-three Weed Warriors can be found ferociously fighting swarms of foreign green invaders. The enemy? English ivy, Himalayan blackberry, clematis vitalba, and scotch broom.

Although the battles are never ending, the weed warriors are gaining ground. And the efforts of these valiant fighters have not gone unnoticed. The Friends of Mt. Tabor Park (FMTP) Weed Warriors won a 2012 Spirit of Portland Award. At a ceremony on October 29th, the Weed Warriors were presented with the Sandy Diedrich Award for Environmental Stewardship and described as working “tirelessly to beat back invasive species that have overtaken native vegetation.”

So what factors have contributed to the Weed Warriors’ success and what can other neighborhood groups learn from this outstanding model of a community-based, volunteer-driven program?

The  Weed Warriors have an extensive list of partners including: Portland Parks and Recreation (PP&R), the Bureau of Environmental Services (BES), Warner Pacific College, Mt. Tabor Middle School Cedar Lodge, Portland Youth Builders, Hands on Portland, SOLVE and many others. These relationships range from one-time service projects to multi-year collaborations, such as the Tabor to the River Program. These close working partnerships provide the Weed Warriors with a reliable source of volunteers, generous donations, increased visibility, equipment, technical advice, and project assistance from bureau employees.

The Take Away: Partnerships are critical to the success of any volunteer supported program.  The programs that tend to thrive, rather than simply survive, are those that have active allies assisting and encouraging them. Working with city bureaus has been essential to sustaining the Weed Warriors’ strong volunteer service efforts. For example, a partnership with BES, has allowed the Weed Warriors to hire a part-time paid volunteer service coordinator. So what are the keys to effectively working with partner organizations, including city bureaus? Frequent communication, developing trust, and written agreements that define roles, responsibilities, and goals of each partner. 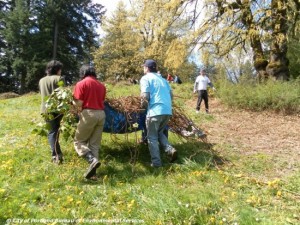 Over the past three years, the Weed Warriors’ efforts have grown from 381 to close to 2500 volunteer hours. In addition to partnerships, some of the factors that have contributed to this increase in volunteer hours are the Weed Warriors’ robust outreach efforts, crew leader training program, and volunteer appreciation & development efforts. To increase community awareness of their program and to recruit new volunteers and crew leaders, the Weed Warriors prepare articles for the SE Examiner, the Friends of Mt. Tabor Park newsletters, and the Mt. Tabor Neighborhood Association newsletters. In addition they post information about their Saturday work parties to Hands on Greater Portland, SOLVE, Metro, Friends of Mt. Tabor Park, Portland Parks, and PCC websites. They also utilize their Facebook page and signage in the park to strengthen their organizational visibility. These outreach efforts have directly resulted in increases of volunteer requests for the Weed Warriors. In order to harness this volunteer power, the Weed Warriors depend on their devoted crew leaders. At the start of each new season, the Weed Warriors rally these core volunteers through a crew leader training program that provides them with the support and resource they need to thrive. The crew leader-training program consists of a handbook with information on roles/responsibilities, reporting forms, lesson plans and resource materials; and a field-based, hands-on lesson on best practices for removing specific invasive species. This training increases the Weed Warriors’ capacity to host more volunteers, improve volunteer retention, and help volunteers work more efficiently and effectively.

The Take Away: When creating a volunteer-based project, start small and with people who have already expressed an interest or with whom you are connected with through social networks.  When the Friends of Mt. Tabor Park Weed Warrior program began in 2000, it was a small, informal group of dedicated members who saw a problem and just started tackling it — with the necessary approvals/permits, of course. It wasn’t until a few years later that they started recruiting additional members. Furthermore, the Weed Warriors’ crew leaders and long-term volunteers tend to be individuals who live in the community and use the park regularly. This highlights the importance of having varied outreach strategies based on targeted audiences. To recruit general volunteers, the Weed Warriors primarily utilized broad online postings. Whereas, to recruit crew leaders and long-term volunteers they have focused on methods that reach their specific community, including local newsletters, neighborhood associations, and churches.

Equally important to volunteer recruitment is volunteer retention. There are several key components in a volunteer program that can enhance volunteer retention. These include social interaction, recognition, placement, and training. Many people get involved in volunteering because it offers an opportunity to connect with people who have similar interests and passions. Long term retention of those volunteers therefore requires that the experience fosters friendship and social interaction. Volunteers should also be provided with recognition for their contribution to the program or project.  Recognition lets volunteers know that others appreciate what they do and that they have something meaningful to add to the community. One of the methods that the Weed Warriors have utilized for both social interaction and recognition is their volunteer appreciation potlucks. Additionally, volunteer retention involves thoughtful volunteer placement – matching volunteers to tasks that fit their interest and abilities – and training, such as the Weed Warriors crew leader training program.

Assessing and defining the success of a project largely depends on the goals of that project and the organization. The Weed Warriors have two mechanisms for setting their goals. The first is the Friends of Mt. Tabor Park Weed Warrior Advisory Committee; which meets twice a year to identify accomplishments and challenges and advise on long-term goals and strategies of the project. The second method is through a Memorandum of Understanding (MOU) between Portland Parks and Recreation and the Weed Warriors; which functions as a coordinated work plan between the two groups. Based on these goals and work plans, the Weed Warriors gauge their progress by tracking the following metrics: number of volunteers, number of volunteer hours, and the percent of invasive coverage remaining in specific areas after the end of each service project. This data then helps the Weed Warriors focus volunteer efforts, compare the effectiveness of different strategies, and measure their impact over time. It also helps them to demonstrate the value of their program and provides a tool for volunteer motivation and engagement.

The Take Away: It is important to recognize and accept that the capacity of a program or project inevitable will vary over time depending upon funding, project leaders, etc. It is essential that this variability be taken into consideration when setting goals and defining success for an ongoing project and that the project team asks themselves whether or not the definition is reasonable for a sustainable model. It is equally important that goals are translated into measurable indicators for evaluation. Ongoing assessment not only allows groups to focus efforts and find areas for growth and improvement, but it also helps capture and articulate what impact volunteer efforts are making. This is particularly important for groups that receive grant or donor funding.

The success of any volunteer driven project ultimately comes down to the commitment of the volunteers themselves and the Friends of Mt. Tabor Park Weed Warriors are no exception. The dedicated individuals who have given their time, energy and passion to the project are at the core of the project’s success. For the Weed Warriors these individuals include: