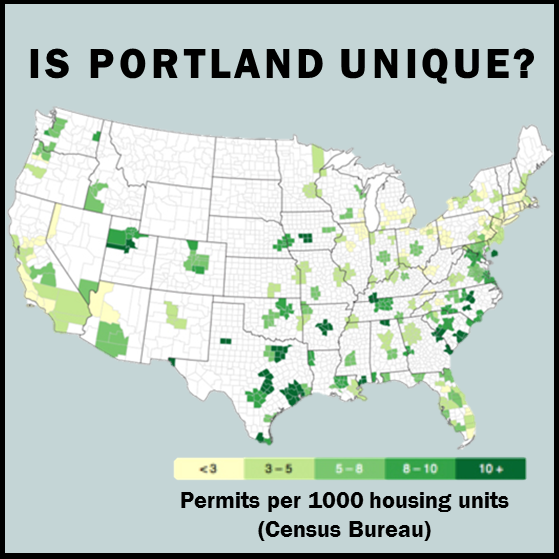 A Tree in a Forest
Is The Current Construction Boom Unique to Portland?

One of the many challenges we face as humans is that it is difficult to see the forest for the trees. It’s easy to see what is right in front of us. It’s more difficult to see how the immediate fits into a larger picture.

Those are significant numbers. They also happen to reflect what is happening in urban areas across the country. According to the National Association of Realtors, more than 220,000 new apartment units were added in the United States last year. It is estimated that this number will grow to more than 250,000 for 2015.

Those are significant numbers. But consider this: from the mid-1990s to the mid-2000s, the U.S. built a little more than 250,000 new rental apartments each year. It was only during the economic recession that these numbers changed, falling in half during the worst economic years. Nationally, we are only now reaching the pre-recession new apartment construction numbers.

What is driving the apartment construction growth in Portland and nationally? In part, we are playing catch up for the recession years when things were not being built. Vacancy rates remain low. We are also in the midst of an economic expansion with job growth in the Portland metro area around 3 percent. Nationally, home ownership rates are at their lowest level in two decades. All of this adds up to demand for apartments.

What is different from previous growth periods is where new development is being concentrated. In Portland, and other cities across the country, development pressures are currently greatest closer to the urban core (Barry Apartment Construction Report, 2014). This is in contrast to previous decades where development on the outer fringe of cities and in suburbs outpaced development in inner cities.  Access to jobs, a desire for walkable neighborhoods, declining inner city crime rates, and smaller sized family units are some of the many reasons attributing to this shift nationally.

In Portland, much of the new housing growth of the late 1990s and early 2000s was realized in outer East Portland where 14,743 new housing units (both single family homes and apartments) were added since 1996. For comparison, SW Portland neighborhoods added 2,229 units during the same time. In some ways, East Portland’s growth relieved the inner neighborhoods of the development pressures that some are feeling today.

Another trend that is taking place both in Portland and the United States is the rising cost of rents. In 2014, the Portland region’s median rent rose a whopping 7.2%. That is more than twice the national average of 3.3%, but within line of rent increases in cities like Austin, Kansas City, and Charlotte.

A city adding apartments units close to its urban core and facing rent pressures – These are just two examples of how Portland is neither weird nor unique. We are part of a larger trend playing out in cities both similar and different to ours.

If we are to truly be able to see and understand the forest in which we live, we need to take an even wider look into things like long-term demographic trends and global urbanization patterns. I’ll save that for another day. For now, let’s get out and enjoy the trees – the real ones in our parks and forests.