Trends In Land Use – The Year Ahead 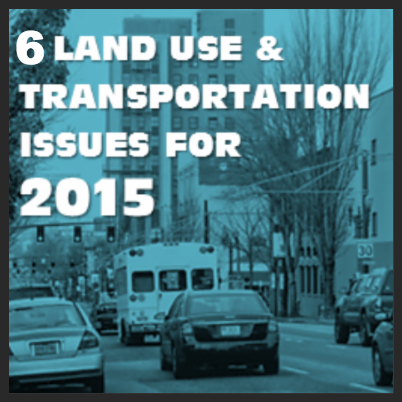 Land Use and Transportation: Issues Abound in 2015

With 2014 in the rearview mirror, it’s time to look ahead to what’s in store for 2015. Here are 6 key land use and transportation topics that I’ll be paying close attention to this new year.

(1) The Apartment Building Boom: The past couple of years have seen a surge in the construction of multifamily buildings. This has been driven by a number of factors including historically low rental vacancy rates. Will the construction boom continue in 2015? A large number of rental units currently under construction will come online this year, which should help to ease some of the current demand for apartments. If I had to wager, I’d say we will continue to see new multifamily buildings springing up, but that toward the end of 2015 the pace of construction will begin to slow as the market finally begins to catch up with the demand. One thing that is interesting to watch is the price of new apartments. Many of the buildings built in the past couple of years have been in close-in neighborhoods and are twice the city’s average price per square foot. The result has been an increase in supply but little relief in terms of prices. With housing demand strongest in the close-in neighborhoods, I suspect we will continue to see most new buildings in our coalition priced at the higher end of the scale.

(2) Completion of the Comprehensive Plan: The city’s plan for how it will grow over the next two decades is scheduled to be adopted in 2015. Included in the long-range planning effort are a few areas of focus that will impact our neighborhoods. The Transportation System Plan helps to guide where transportation investments are made.  The Institutional Zoning Project will impact how larger institutions like hospitals and colleges such as Providence and Reed College can grow, while limiting the impacts to surrounding neighborhoods. This could mean higher buildings in the interior parts of campuses and more requirements to blend new buildings with existing neighborhoods along the fringe of campuses. The Mixed Use Zones Project will develop new zoning designations in our centers and along our corridors. This could result in changes to how tall mixed use buildings can be built, as well as changes to how they interact at the street level and with adjacent residentially-zoned properties. And then there is everyone’s favorite topic: parking. New policies and codes may be on the way to address parking demand management.

(3) Roadway reallocation: The past couple of years, we’ve seen parts of NE Glisan, E. Burnside, and SE Division undergo reconfigurations of their automobile lanes as part of an effort to make them safer for all road users. SE Foster will also see cross-section changes starting in 2016. The year ahead offers an opportunity to evaluate these changes and the impacts they might have on other parts of the transportation network. Is traffic spilling over to residential streets? Is it being diverted elsewhere? Are there increased traffic delays? Are there fewer crashes? These questions will be examined as we continue our community conversation about how our roadways are utilized.

(4) Legacy state highways:  82nd Avenue and SE Powell were originally built as state highways with the primary purpose of moving people and goods. Both roads do this today, of course, but they also serve as main streets for those living along them.  As roadways and the areas around them change, what is the best way to balance the need to move cars and goods with the desire for things like safe crossings, street trees, and vibrant businesses? This year we should see some attempts at answers. ODOT is beginning a planning effort for the 82nd Avenue corridor. Metro continues to plan for high capacity transit and development along Powell. The work done in 2015 on these projects could lay the groundwork for what is to become of these legacy highways.

(5) Legacy bikeways: SE Ankeny and SE Clinton were among the first bike boulevards developed in Portland and they remain among the most widely utilized in the city. With new development on SE Division and on East Burnside flourishing, there has been an increase in the number of cars using these bikeways and an increase in the number of conflicts between roadway users. Some have called for the installation of diverters to provide a disincentive to cars using these streets. Others have voiced objection to the use of diverters. In the coming months, I expect this conversation to heat up.

(6) Tree Code Implementation: For those of you with good long-term memories, you might recall that City Council passed the Citywide Tree Project back in 2011. You might be wondering what has become of that effort, which sought to improve the city’s regulation and protection of trees. After implementation was delayed due to a lack of funding, the new code goes into effect on January 2, 2015. How will this impact you? If you are planning on removing trees on your property, you may be required to get a permit depending on the size and location of the tree.  How smoothly will the implementation go? How effective will the new regulations be at protecting trees? Will there be unintended consequences? 2015 holds the answers.