Trends in Land Use – November Edition 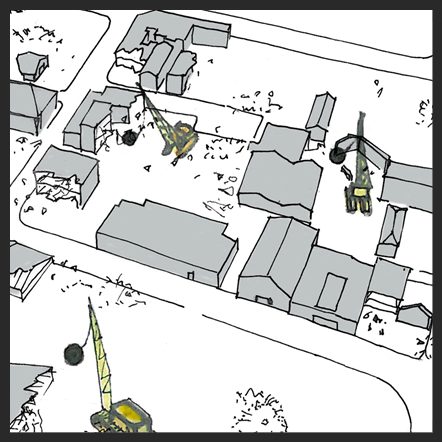 “Why wasn’t I notified about it?”

This is a question I frequently hear from neighbors when they learn about a new development occurring in their neighborhood. Often this question is asked when they see construction equipment on a site – their first indication that something might be going on.

In most instances, the reason neighbors were not notified of a particular development is because it is being built “by right”. That means the project meets all the requirements set out in the city code for the particular land use zone of the property. If the developer is not asking for any adjustments to the code, there is not a requirement to notify immediate neighbors, the neighborhood association, or the district coalition.

If the developer is asking for an adjustment (for example, a three- foot setback from a neighboring property line instead of a five-foot setback required by code) or something that requires a land use review, notice is sent out to neighbors in close proximity to the property, as well as to the neighborhood association and the district coalition. The notice provides an opportunity for neighbors and neighborhood associations to weigh in on the requested adjustment(s) and these comments are considered by the city staff and/or land use hearings officer reviewing the case.

You can track these types of notifications for all neighborhoods in Portland here: http://www.portlandoregon.gov/bds/36652

Another source of frustration for many neighbors is that they are not notified before a house in the neighborhood is demolished. City code does call for a delay and notification to the neighborhood association and district coalition before most houses can be demolished, but there is a way for developers to avoid this delay and the subsequent notification requirement.

To preserve housing in the city, the Portland City Code under Title 24.55.200 requires that the issuance of a demolition permit (for some residential structures) be delayed for 35 working days. The delay gives other parties, such as a neighborhood association, notification of the proposal, and time to take action, such as offering to buy or move the house. Demolition delay applies only to the demolition of residences in residential zones. When an application for a building permit for a replacement dwelling on the same site is applied for and paid for at the same time, the demolition delay can be waived.

Given the existing notification rules, what can you do if you are concerned about potential changes or development to a site? Here are a few ideas:
Bob Kellett is the Neighborhood Planning Program Manager at SE Uplift. He can be reached at (503) 232-0010 ext. 314 or bob@southeastuplift.org
Tags:land use
Phoebe Gildea