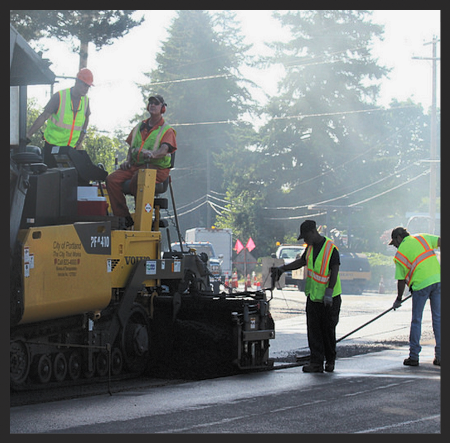 Money Makes The Wheels Go Round

As the weather turns the corner toward summer and neighbors dust off their bikes, skateboards, roller skates, or pogo sticks, it’s a good time to think about how we pay for the roads and sidewalks we use every day. Transportation funding is currently getting a lot of attention at the federal, state, and local level, mostly because there isn’t enough of it. Due to rising costs of construction, lack of political will to raise gas taxes (the federal gas tax was last raised in 1993), and increasing fuel efficiency, the Portland Bureau of Transportation does not currently bring in enough revenue to pay for the maintenance of our existing transportation infrastructure, let alone building new infrastructure.

The National Highway Trust Fund, which is funded with gas taxes, will run out of money this summer, which would leave states hanging.  According to a Transportation for America analysis, about half of Oregon’s highway and transit expenditures come from the federal government. Typically, federal money goes toward new construction, rather than maintenance and operations. The Oregon Department of Transportation recently announced that the construction budget in 2020 will be less than half of what it was in 2009.

If you think your neighborhood streets are not in great shape, you’re probably right. A little under half of the most heavily-used roads in Portland are classified as in either “poor” or “very poor” condition, according to the 2012-2013 Portland Bureau of Transportation annual report.  The Bureau reports that it will need an additional $1.5 billion in funding to restore the City’s transportation assets to fair or better condition and maintain them at that level.

As governments face the gap between income and expenditures, agencies are looking to new ways to raise and allocate money. At the local level, the Portland Bureau of Transportation has been holding town halls to talk about how we fund transportation in the city.  The Bureau’s current proposal to fill at least some of the financial gap between the system we want and the system we have is a monthly “street fee” paid by households and businesses.  Other options considered by government agencies across the country include vehicle registration fees, increasing the gas tax at the state or federal level, taxing “vehicle-miles-traveled,” fees levied on the larger vehicles that do more damage, paid parking, and many other tools. The proposed street fee may or may not be the best option to fill our transportation funding gap, but the truth remains that a very large gap does exist.