Trends in Land Use – August Edition 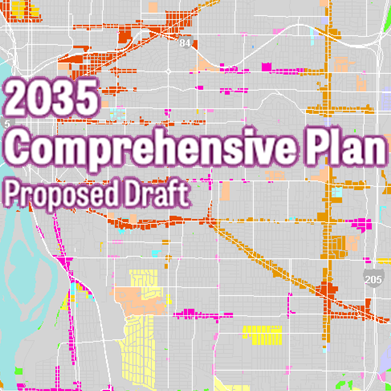 The Bureau of Planning and Sustainability recently released a proposed draft of the Comprehensive Plan map. The Comprehensive Plan is the city’s effort to set the framework for the physical development of the city over the next 20 years. If this framework is achieved, what can we expect SE Portland to look like in 2035? Here is how I interpret the changes proposed in the map. 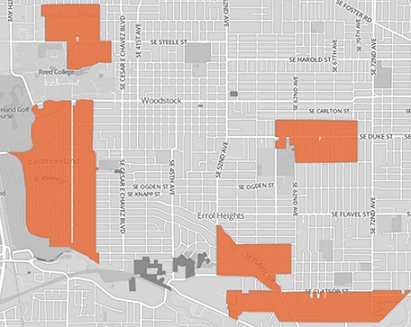 The overwhelming majority of the properties that are currently zoned for single family and lower density housing will remain that way. Most residential properties in our coalition area that are not located on main streets or in commercial centers will maintain their current zoning.

The biggest exceptions are areas in the Eastmoreland, Reed, and Brentwood Darlington neighborhoods which are proposed to be “downzoned,” meaning that instead of allowing one housing unit per every 5,000 square feet, there would be one housing unit allowed per every 7,000 square feet. In the case of Eastmoreland and Reed, these changes were advocated for by the neighborhood associations in an attempt to have zoning more closely reflect what is currently on the ground in their neighborhoods, and to preserve neighborhood character. The proposed changes to Brentwood-Darlington are in areas zoned for medium density development that the planning bureau does not believe have close enough commercial centers or frequent transit services to support increased population numbers.

Moving forward, there will continue to be infill, changes to the housing stock, lot splitting, and some increases in density on our single family residential streets, but the bulk of new housing for Portland’s expected population growth is directed to corridors and centers.

Corridors and Main Streets Grow Up 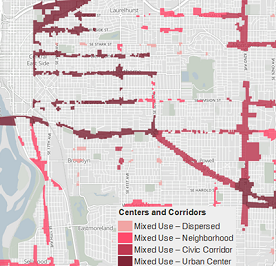 Interestingly, city planners predict that more than half of Portland’s residents in 2035 will live alone. This has big implications for the types of housing that will be needed. Think smaller housing units in multi-unit complexes. The planners estimate that by 2035, 80 percent of new construction in Portland will be multifamily housing. Most of the new apartments and condos will be located on corridors and main streets like Belmont, Hawthorne, and Foster. What we are seeing today on SE Division will likely play out elsewhere, with multi-story mixed use projects that include housing, retail, and offices replacing lower density structures. As part of the Comprehensive Plan, there is a Mixed Use Zones Project underway that will ultimately replace the current “commercial” zones with “mixed use” zones. This process is intended to provide regulatory tools to address issues that arise with newer intensive mixed use forms, such as building mass and/or bulk, design and context, transitions and step-downs, and ground floor uses. 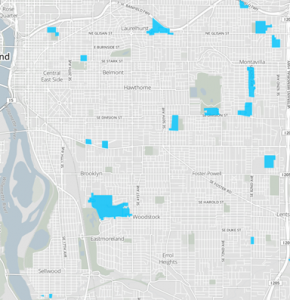 Over the past decade, some of the fastest job growth in the city has occurred in the health care and education fields. Institutions like Providence Hospital, Reed College, Portland Community College and Warner Pacific are adding jobs. These institutions’ campuses are mostly surrounded by residential neighborhoods and are, themselves, zoned residential. This has made it a challenge for them to expand their facilities without further encroaching into the neighborhoods and without lengthy conditional use processes. The proposed draft map acknowledges that job growth will continue to occur in these fields and seeks to provide zoning that allows the institutions to build higher and denser in the center of their campuses rather than spread out into the neighborhoods. The Institutional Zoning Project is currently underway and will result in new processes and zoning standards. The tradeoff from a neighborhood perspective could be that without conditional use processes (or some other process) there may be fewer opportunities to weigh in on how the institutions develop and on related issues like traffic and parking.

With 122,000 new households in our city by 2035, how will people get around? The proposed Comprehensive Plan makes it pretty clear that SE Portland will not be getting new roadways or wider streets. Instead, the transportation element of the plan focuses on getting more out of the existing roads by increasing facilities for people to get around on bike, on foot, and by using public transit. SE Powell and SE Division are both expected to see some form of high capacity transit, while roads like SE Cesar Chavez and SE Holgate will see improved sidewalks and better crossings for bicyclists and pedestrians.

The city has set up a phone hotline, (503) 823-0195, if you have questions about the Comprehensive Plan or a specific property. You can also drop in and talk with Marty Stockton, our District Liaison from BPS, on August 19 at the Belmont Library from 4-6pm or attend one of the other drop-in sessions happening in August. There are also multiple ways you can provide formal testimony, including adding your comments to the Map App.