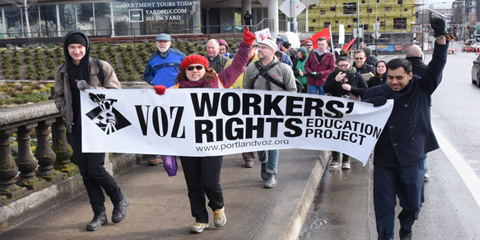 By: SE Uplift and VOZ

SE Uplift has partnered with VOZ Workers’ Rights Education Project for many years.  VOZ is located within our coalition area and has been awarded grants through SE Uplift’s Small Grants Program in 2009, 2010, 2013 and 2015. Most recently, VOZ held their staff retreat in the SE Uplift Garden Room. In the following article from Voz, they describe a new, permanent home for day laborers in Portland.

Prosper Portland’s Board of Commissioners voted unanimously to approve Voz’ five-year lease and option to purchase on the MLK Jr. Worker Center Property on February 14th, 2018. This historic decision comes after years of organizing and negotiations, and is a huge step forward for a permanent home for day laborers in Portland!

Voz is a worker-led organization that empowers diverse day laborers and immigrants to improve their working conditions and protects civil rights through leadership development, organizing, education and economic opportunity. Day laborers are urban migrant workers who are hired on a day-to-day basis to perform difficult tasks such as hauling debris, construction, and demolition. They face extreme economic and housing insecurity, labor abuses such as wage theft and unregulated work environments, and racial and anti-immigrant discrimination. Day laborers bring diverse perspectives to bare on community organizing issues and have long fought for a permanent home in Portland.

What does it mean?

Five-year lease and an option to purchase, what does that mean? We know the language is confusing, but this vote means that Voz has first dibs on the Worker Center property for the next five years. No developer can buy it out from under us, and day laborers have a legal claim on a street corner in the neighborhood where they have sought work for decades. It also secures Voz’ lease, which has been month-to-month since 2013, for those five years. This vote also locked in the price of land at $319,100 – the assessed value of the property when Voz first opened the Worker Center in 2008. This is a huge victory for day laborers and a victory against the gentrification of the Central Eastside.

The five-year timeline gives Voz ample time to do environmental, architectural, and other studies on the land to finalize our plans for building a permanent Worker Center building. And then we build a building! This is an incredible opportunity to increase the sustainability and impact of Voz and to secure a permanent home for Portland day laborers.

Voz was formed on the street corners by day laborers organizing themselves for economic security, dignity, and civil rights. This organizing led to the opening of the MLK Jr. Worker Center in 2008, the only worker center in the state of Oregon. Since 2008, Voz has achieved major victories for the economic and political empowerment of day laborers, even as we have worked out of temporary structures on the Worker Center lot and navigated the instability of month-to-month leases. Now we have the City’s support to Build the Dream of a permanent building.

This will be a huge undertaking and will require the support of Voz’ incredible grassroots base of day laborers, volunteers, Vozistas, ally organizations, coalition partners, funders, elected officials, and community members who maybe haven’t even heard of us yet. We ask you to join us now in solidarity with day laborers and the dream of a permanent home in Portland. Please email btd@portlandvoz.org to be included in Campaign efforts going forward; we will be convening an allies meeting in the coming months.

Together we can build the dream!