Sharing the Green Beauty of Foster-Powell 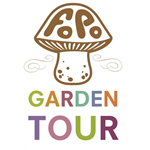 Tamra Tiemeyer, Project Coordinator for the Foster-Powell Garden Tour, invited me to meet with the garden tour committee last Sunday.  I was greeted by women pulling carts filled with plants and welcomed into a warm home with homemade treats and lots of laughter.  My first thought was ‘wow this seems so fun, what a great way to get involved in the neighborhood.’  The group had an action packed day- first meeting to discuss logistics for their Sixth Annual Garden Tour before heading down the street to their future Community Garden site for the Neighborhood Plant Exchange!

The Plant Exchange, an opportunity for neighbors to swap plants for free, originallybegan in 2007 and was so successful and well attended by local gardeners that the idea hatched to organize the first Foster-Powell Garden Tour in June 2008. Linda Goertz, Jennifer Anderson, Erica Bjerning and Tracy Gratto all had their hands in the planning of this inaugural event and many of the lessons learned and logistics have carried over year after year. 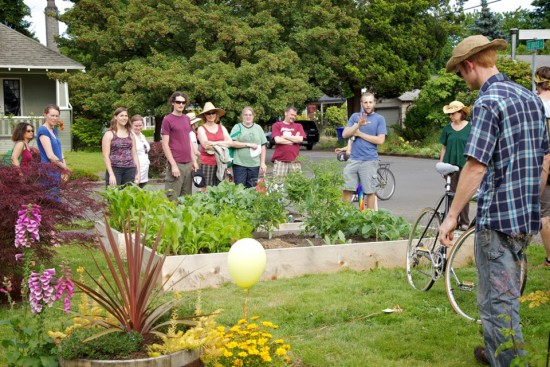 Linda Goertz, one of the original coordinators, and Tamra Tiemeyer, the current project coordinator, were kind enough to share some important logistical details.  One of the most time consuming, but important first steps is identifying garden hosts. Project coordinators do this by simply walking and driving around the neighborhood, browsing local front yards.  They are not necessarily looking for pristine, professionally maintained gardens, but rather ones that are creative, accessible and will give tour participants some real ideas for their own gardens.

Once a yard is identified, committee members knock on doors to let homeowners know they love their garden and to invite their participation, leaving a postcard with more details and an email address to sign on as a host.  When homeowners aren’t available, they leave a postcard and return to the home at different times of the day/week trying to catch them.  The approach has clearly been effective with the number of garden hosts increasing from 23 gardens the first year to nearly 60 for the upcoming event on June 15, 2013!

It was this personal invitation to participate as a garden tour host that got Tamra involved with the Foster-Powell Garden Tour several years ago.  Tamra’s first gardening experience was in Chicago when a neighbor asked for her help putting in some plants he had purchased.  “With a few helpful hints, plants in ground and flourishing, I was hooked!  I started going to the local garden tour in our historic “Ukrainian Village” neighborhood and dreamed of someday having a garden of my own…  It was like a dream come true when I received an invite a few years later inviting me to take part in the neighborhood garden tour.”

In time, Tamra chose to take a more active role in the event and stepped up as the Project Coordinator.   This is a role that she has come to value since it has changed her relationship to her neighbors and the community.  “There is something special about being invited into someone’s private sanctuary. It creates a shared feeling of trust and appreciation in the community,” she says.

Building off of the foundation layed in years past, Tamra has developed a strong system, which helps the event run like clockwork each year.  She was happy to offer some of these tips to the South Tabor Neighborhood Association last year for their first annual event.  “It seems events like the garden tour come to be through passionate individuals and groups.  I hope anyone who dreams of an event for their neighborhood feels empowered to take the initiative to get it started,” she says.

When asked why volunteering is so important, Tamra shared: “Volunteering and taking part in seeing ideas come to life and building a sense of community in your immediate surrounding is very rewarding, if not a little addicting!”   She does however, caution volunteers to maintain balance in their lives and not overcommit.  “Better to go for the long haul and dedicate yourself to what you’re truly passionate about than to over commit, burn out, and stop altogether.  Events and projects will develop a life force of their own and can carry on through the years so I think it’s important to be extremely open and encouraging to anyone who would like to take part.  When you see the same passion in those around you, be ready to pass along any aspect to the people who are willing and interested.”

According to Tamra, “The spirit of the neighborhood really shines through at the garden tour. It is the moment of communal pride, gracious hosting, and the down to earth beauty of the hosts and their gardens that keeps my heart in it year after year.” 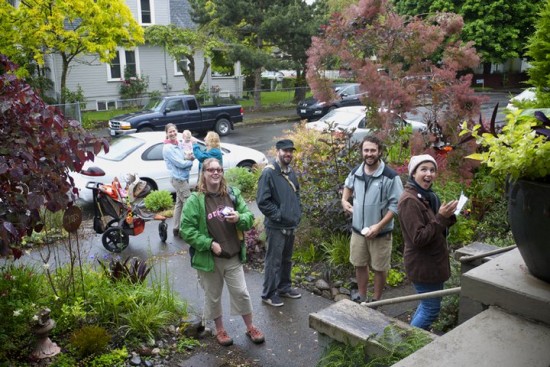 Thank you, Tamra and the rest of the Foster-Powell Garden Tour Committee.  It’s volunteers like you that make SE Portland such a great place!

This year’s Foster-Powell Garden Tour will be held on Saturday, June 15, 2013 from 10AM-4PM (two tours this year- 10AM-1PM and 1-4PM).  For more information, visit the FoPo Gardens page on Facebook or email fopogardens@gmail.com.