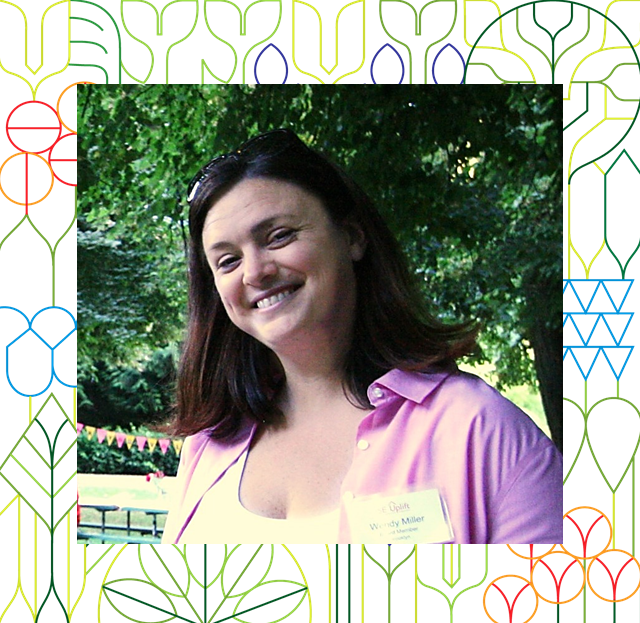 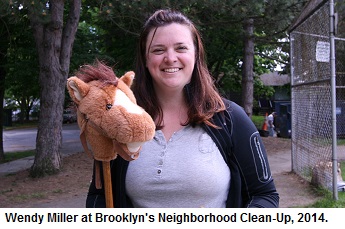 A passionate advocate for her neighborhood and incredibly knowledgeable, Wendy Miller is not afraid to work with diverse opinions and hot-button issues. As a board member to Brooklyn Action Corps she serves as the SE Uplift Representative, coordinates the annual neighborhood clean-up, and sits on the committee looking at development of Trimet-owned properties within the neighborhood.

How did you originally get involved with the Brooklyn Action Corps?

I volunteered for the neighborhood clean-up and they quickly talked me into attending a couple of meetings and after that the rest is history. I went to three meetings, was voted onto the board and became secretary within four months of helping out with the clean-up.

You recently decided to take on the position of the SE Uplift Representative for your neighborhood. What do you hope to accomplish or contribute to in this new role?

I think it’s important that the Brooklyn neighborhood concerns are represented at the coalition level. I also think it’s very important that we’re bringing back the concerns and projects from the Southeast Uplift Board to the Neighborhood Association. With all the construction happening in the neighborhood right now, it’s very good for us to be part of the conversation SE Uplift is having and to understand what’s happening with the construction changes. Prior to me being involved we didn’t have anybody on SE Uplift’s board, so there was a lot going on within SE Uplift that we weren’t taking advantage of. I think making sure communication is happening in both directions is very important.

You are also one of the coordinators for Brooklyn’s Neighborhood Clean-Up, which was very successful this year. Can you tell me a bit more about that and what you’d attribute the success to?

Two years ago SE Uplift started hosting a clean-up organizer meeting so there was more communication amongst the different neighborhoods, which gave us an idea of what other people were doing well.  We were able to pull ideas from other neighborhoods, including having a rummage sale. We incorporated that into our clean-up last year and this year it really started to get some legs. We had our most successful clean-up this past year. The weather didn’t hurt.

The other thing we did a little differently this year was change the branding and re-named it the “Brooklyn Haul-Away and Neighborhood Clean-Up” so people would have a better sense of what it was. We used some imagery around that, and I think that also helped. In addition to advertising it in our newsletter – which is extremely successful for the Brooklyn neighborhood – we also went around within ten days of the event and put up flyers around individual homes. So it was a lot more “in your face.”

On a related note, how did you get the fantastic design for your clean-up flyers?

My husband (laughs). You got to give him a project, right? We were throwing around ideas and haul-away came about. We ran with it and he threw some stuff together and we picked one.

What do you think the biggest issues facing the Brooklyn neighborhood are right now?

You’re currently on the Trimet committee looking at redevelopment of the Advantis property on SE 17th Ave. What has the process been like and what do you hope the end results will achieve?

That is actually the third Trimet property committee I’ve sat on. The first one was the Gideon property which is on the border between the HAND (Hosford Abernethy) neighborhood and the Brooklyn neighborhood. I also sat on the Boise Mall committee.

It’s an interesting process. It says a lot for Portland as a city that while Trimet doesn’t necessarily need to do what they’re doing – they own that property and could turn it into more parking lots for their employees if they wanted – they’ve chosen to make the effort to find something that’s going to work for the neighborhood. Now they still have things they require – so it’s an exercise in compromise, which I think is a dying art form. But it’s also been a rewarding experience to see the needs of the neighborhood represented in the process. We’ve heard over and over again that process is a big issue and we’ve been able to really push that into the selection procedures so that when developers are coming in they have to speak specifically to how their project won’t infringe other properties.

It can be challenging but it has been rewarding to see how well everybody is working together. The developers, the Neighborhood Association, the neighbors, Trimet, Metro, and the city itself.

The light rail is a huge change to the neighborhood and accordingly has inspired a range of emotions and opinions from its residents. Has it been challenging reconciling these different priorities and hopes for the neighborhood?

You’re always going to have varying opinions. It is definitely challenging and will continue to be. I think for the first time in more than fifteen years the Brooklyn board has all of its board seats filled, and that goes a long way in making sure we’re representing a cross section of the neighborhood itself. There are people on the board who are in favor of the development and there are others who prefer that nothing changes. It’s our job to balance the competing opinions within the neighborhood and when they’re all represented on the board itself it’s a lot easier to do so.

What role will the Brooklyn Action Corps play as light rail moves from planning to reality?

We’ve been very involved throughout the planning. We helped with selection of the art installation. One of the things we deal with as a neighborhood – and it’s always been an issue and with light rail will be compounded – is the parking situation for Trimet employees. We’ve addressed that with Trimet and they’ve come up with some creative solutions. We’ve worked very closely with Trimet throughout. We have a Trimet representative working directly with the neighborhood board who is at every meeting. We also have a parking representative who comes in every few months to update us on the plans. We also have the newsletter, we have an email list, we have Facebook, so we’re trying to get the word out as much as possible.