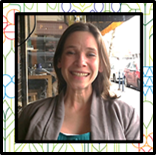 Rachel Davies is passionate about the well-being of her neighbors, even going so far as to move to Portland because of how impressed she was with the strength of our neighborhoods. As a student she sat in on city council meetings and dedicated lots of time to volunteering. When she moved to Portland 8 years ago, she began attending Neighborhood Association meetings with her husband Darian, and was eventually elected as chair of the Creston-Kenilworth Neighborhood Association (CKNA).

We sat down with Rachel to discuss CKNA’s newly formed business committee, her experiences being a chair versus a co-chair, and how she has successfully navigated family and volunteer life.

When you joined the CKNA board in the spring of 2012, it was in a difficult transition period with very few board members. What was that experience like and what have you found to be the keys to reinvigorating and sustaining the new board?

It was exciting, actually. You guys (SE Uplift) did this fantastic outreach effort where you put flyers on every single door in our whole neighborhood, and we got some fantastic people to come out. Darian’s initial experience was during a waning period of neighbor involvement, which made it hard for him to maintain his motivation as people were disappearing. So it was great to suddenly have this group of people who were really interested in the stuff we were doing. And I think, really, that’s the key. It’s having a core group of people who enjoy working on projects together, sharing ideas, and seeing them through to completion.

Speaking of ideas and projects, which CKNA project are you most proud of?

Well, we had some successful events over the summer, which were really fun and it was gratifying to see people come and be a part of an event that we put on and organized. But I think the thing I’m most proud of is just being part of this group of people. We’ve had some people come and go, but there’s this core group of people that likes interacting with each other and creating this new energy in our neighborhood. And I think that’s what I’m most proud of – to be a part of that.

You have been both the chair and the co-chair of the CKNA board. What do you feel are the pros and cons of each arrangement?

My co-chair and I were good friends before we took on the role together, which meant we trusted each other already. If I missed something she would pick it up and if she missed something I would pick it up, and so we had this nice partnership where neither one of us felt like we had to have our fingers in every single pot. It takes a lot of energy to get things started from zero, so having somebody who I could easily work together with was enormously helpful.

I personally didn’t experience any cons. I think it was a great arrangement. The con could potentially be that if you there wasn’t a strong relationship between the co-chairs, it could be easy for one person to slack off and the other to feel like they have to pick up everything, but I didn’t experience that.

But now that we’ve gotten momentum going and I’m confident in my ability to run the meetings, it hasn’t been too overwhelming being the chair by myself. I also think it is easier if you know that there’s one person who is overseeing all of the projects going on; it maintains continuity. So I guess that’s a benefit to having a single chair.

Your whole family is involved with CKNA – your husband is a fellow board member and your kids regularly attend the meetings. Given that you have been able to successfully navigate both the world of volunteerism and family, what advice or encouragement could you offer other families out there who want, but struggle, to become involved?

You know, something that I’ve learned is that if you really want to do something, you can find a way to make it work. If you like the idea of doing something but can’t quite figure out how to make it work, then maybe it’s just not the right time. That’s always the reality of volunteer work. Not only are we helping to create the community that we want in our neighborhood – which is a powerful thing – we’re teaching our kids that it’s important to give back. And there’s no better way to teach them that than to just do it yourself.

CKNA recently started a small business committee. What was the spark for forming this committee and what are its goals?

It seems like a great area to start talking with businesses and spread the word.

And we have. We’ve talked to several of the small business owners and even Hopworks, which is not exactly small [laughs]. And it takes a little while to get momentum. Once you have a few people attending, then it’s easier for other people to say, “OK I’m going to come join.” So we’re still on the small snowball and we’re waiting to get on the big snowball. But it’s a really cool group of people because they all have different goals for the group, but they’re all perfectly legitimate. Some of the smaller shops just want to have a place where they can come and hang out with other business owners, share ideas, share problems, brainstorm things; not feel so isolated. And then there are others who have been around a long time and are very well established as a business, but they want to be more involved with the community, and so they’re looking for ways to branch out locally. It’s the most effective way to build your business clientele – within your neighborhood.