This month we sat down with Buckman’s sustainability committee chair, Nancy Oberschmidt. A resident of Buckman for over 30 years, she has been a key force in implementing a wide range of neighborhood projects, including a community composting site, a book exchange, and the “Picture A Garden” program that turns unused parking strips and side yards into community garden plots.

What drew you to the Buckman area?

I’ve lived in the Buckman Neighborhood since ’78, and we had a really small house further out. My husband kept driving through this area on his way to work and we saw some “for sale” signs and, well, there you go.

How has your perspective on what is special about the area changed since you first moved here? Is it because the area has changed, or because you know it better, or something else entirely?

Well, I think it’s an interesting area because it has a mixture of lots of different types of people, including some African-American, quite a few Hispanics, and it’s close to downtown. When I was working at OHSU I could walk to work which was pretty cool, and then I started riding my bike to work. The main drawback is a lack of a grocery store in my immediate area; I can walk to several different grocery stores but none of them are really convenient.

How did you first get involved with the Buckman Neighborhood Association?

I retired in 2008 and I had previously gone to a few Buckman meetings, but not very many. Then at the one I went to when I first retired, Tim O’Neil [a previous SE Uplift employee] announced that he wanted to start a sustainability committee, and so I raised my hand for that. That’s how I got involved.

So was it because you wanted to be involved in sustainability issues, or was it just a general curiosity?

Well, I like to go to the meetings just to know what’s going on, but the sustainability issues are also what I’m really interested in. I’m a master recycler; I started a composting program at work and so it’s all right up my alley.

Speaking of composting, you helped create Buckman’s community compositing project, book exchange, and picture-a-garden program. Can you tell me a bit about what your experience working on these projects has been like? 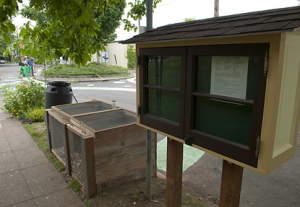 The big thing is that we had a lot of help when we first started. We had a big committee and we had students from Portland State that worked with us, and so we had a lot of momentum. And then of course they graduated, moved out of town or went to graduate school, and left us. So basically I’m the sustainability committee at this point, but the big plus is that I can get tons of volunteers. Right now I have a fantastic group of volunteers for the composting program. They come every week and cut up the stuff that isn’t small enough, mix it all together, make sure the sawdust is mixed in, and all that. Basically if I have a job to do, people come. But if it’s a meeting to go to, they don’t [Laughs]. They don’t like to go to meetings.

You mentioned involvement is tricky, and sometimes the problem is not getting people involved in projects but keeping them involved. Do you have any suggestions for folks on sustaining longer-term projects and involvement?

I think you just have to have somebody that will stick with it, you know? Someone who will follow through and stay organized and not forget about it.

In your opinion, why do you feel Neighborhood Associations are important? What do you feel you gain by participating with yours?

Because that’s how I got started. When we first started with the composting project I was figuring out who would have little composting stations all over the neighborhood. It was a lot of walking and a lot of work sustaining it, and then the city started picking up food debris, so that changed everything. It meant that I have less volume, but it’s a volume more suitable for my location. For a while there it was a bit too much. We figured out that we need someone right there to be in charge of it. I’m in charge of it because it’s in my corner, but any place else you’d have to have somebody who’s totally committed. They have to want to do it, and they need to be around for a while. We’re a neighborhood of (mostly) renters – like in the 80% area – and so people aren’t necessarily around for a long time. That’s part of the reason committees come and go, and that’s why it’s easier to organize a work party than a regularly scheduled meeting.

What advice would you give to someone wanting to accomplish a project through a Neighborhood Association?

I think just go for it. Let them know what you’re doing. One of the things I haven’t done is write them a report every year, which I think I should do, so they know all the details of what I’m doing and because it’s under their umbrella. But ultimately the best advice I can give is you just got to go for it.