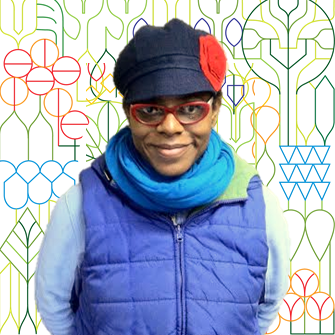 As a nine-year resident of the Reed Neighborhood, Marisha Childs knows what makes her neighborhood special; its proximity to downtown, public transportation, and parks are just a few of Reed’s attributes of note, but it’s Reed Canyon that keeps her kids entertained for hours. The natural area is home to otters, beavers, salmon, frogs, newts and a wide variety of water fowl – making Reed one of Portland’s best kept secrets. Marisha is currently serving as the chair of the Reed Neighborhood Association and recently helped organize a successful neighborhood clean-up in collaboration with the adjacent Creston-Kenilworth Neighborhood. We sat down with her this month to talk more about her neighborhood, her desire to engage her neighbors, and her experiences as a neighborhood advocate.

Had you been involved in civic engagement prior to joining the Reed Neighborhood Association? 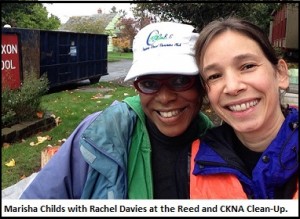 Reed and Creston Kenilworth recently had a joint clean-up event. How did it go?

It went well, especially considering the shortened timeline we were on. We had to pull the event together very quickly. It was a lot of work, but we had lots of people show up and bring their junk. I think the postcards we mailed to all of the households within the two neighborhoods were very successful at getting the word out. We did have two dump-and-dashers, which kind of sucked, but they were memorable to me; I will remember those two!

I think we learned from our mistakes. We learned what we’ll do in the future and we’ve committed ourselves to doing it again, and I think we had a great time. We had a lot of volunteers too, which I was nervous we might not have. We had organizing meetings and no one would show up, but when I sent out the emails people said, “Yes, I’ll volunteer for both Reed and CKNA.” So we ended up having plenty of volunteers at the event, and we even had some neighbors just show up; they hadn’t responded to my emails ,but they showed up the day of the event and said, “Hey do you need any help?” I thought that was really awesome.

Any plans to partner with CKNA on future projects?

I would totally do another joint project with Creston Kenilworth. Our neighborhoods are so similar, not just in location but we’re both close to two other neighborhoods that have much more thriving businesses within them, whereas our neighborhoods are more residential without that booming business component. Reed has Trader Joe’s but we’re kind of on the outskirts. We’re surrounded by Woodstock which has more business and Creston Kenilworth has some businesses as well, but they’re surrounded by some other communities that have bigger businesses. 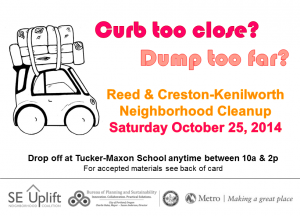 What do you feel are the keys to successful NA recruitment and engagement?

Gosh, well if you know the keys to success please tell me!  One of the things neighbors mentioned at the clean-ups when I asked them how they found out about it was the postcards we sent out. We figured that was the best way to get the word out to our neighbors. So I think sending out newsletters or flyers is best; something tangible that they can keep as a reminder. I think we all get inundated with electronic communication and things get buried. I know sometimes somebody will tell me, “I sent you something! Did you get it?” And maybe I did, but it just got overlooked because I get so much stuff.

I’ve walked around our neighborhood and talked with our neighbors door to door which is incredibly time-consuming, so I only do it on Wednesdays. It’s my one day off and in theory I’m supposed to try and work from home, but I try to chat with a few neighbors and find out what they’d like to see the Neighborhood Association do or if we’re addressing the issues they want us to address. I realize some people can’t make it to meetings and I totally respect that. I think having an appreciation for what people want addressed and listening to them and trying to make sure they’re heard and we’re addressing their concerns is extremely important.

What do you wish people knew about Neighborhood Associations?

I wish they knew that we hear them and that we are trying to address their concerns. When people send me an email, I do personally respond. Some things are hard to address, like neighbor-to-neighbor disputes. There’s not a whole lot we can do about that. You probably just need to speak with your neighbor. But if there’s something related to crime, I’ll connect them to our crime prevention coordinator or speak to whomever I need to speak to to try and resolve the issue. Someone emailed me about a tree and how to find out whether there’s a heritage tree in their yard and I sent them a link on the city’s heritage tree policies. I try to find the answers to whatever their concerns are and be as helpful and encouraging as possible.