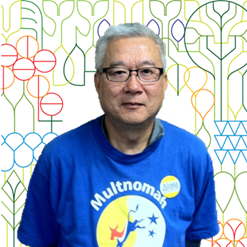 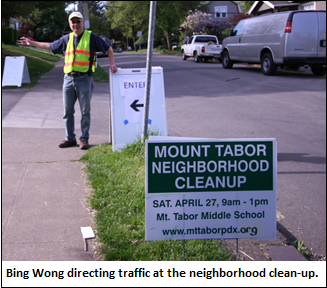 This month’s Volunteer Spotlight is shining on Mount Tabor Neighborhood Association’s Treasurer, Bing Wong. Bing has served on the MTNA board since 2004 and has also recently joined the Friends of Mount Tabor board. Outside of his volunteer work, Bing is an avid birder and enjoys the lush beauty and splendor of Mt Tabor. We sat down with him to talk about his role on the board and all that it entails.

When did you get involved with the Mt. Tabor Neighborhood Association and what originally motivated you to join?

My first meeting was about off-leash dogs in the park. It was a huge, contentious meeting. It was one of my first opportunities to attend because I had just changed employment. Before that I had another work related board meeting every month on the same night as the neighborhood association’s meetings. So after I changed employment I started attending meetings and I felt compelled to get involved in my own neighborhood.

How has the Neighborhood Association changed over the years?

Why does civic participation matter?

It’s like politics in general; there are all these professional lobbyists down at the state legislature in Salem, and if citizens don’t get involved in their neighborhood or city or their state, then only voices that get heard are the lobbyists, and we get that a lot, even in the city. We talk about land-use and how zonings are put together and people in the neighborhoods feel like they’re being bypassed in the decision-making because the lobbyists are down there talking to the planning bureau. The city has interests and the more they build the more revenue they get from property taxes.

What drew you to take on the treasurer position on the MTNA board?

Well, someone asked (laughs). And they said it wasn’t going to be too much work.

You’re also on the Friends of Mt. Tabor board. Do the two boards currently work together on any projects? Do you have any ideas for future collaborations between the two boards?

What advice would you give to a new neighborhood association treasurer?

Someone wants to take it over? Well, it’s pretty easy! (Laughs)

Getting second signatures on checks does require some effort. You have to run down and locate someone and all that. But our funds aren’t that big, compared to other groups, so it’s not a huge hassle. I’m also treasurer for the Multnomah County Democratic Party and there’s a lot more work involved there.

What’s something you’ve been involved with as a board member that you’re really proud of?

Being involved in the Neighborhood Clean-up, which is our biggest fundraiser, has been a lot of fun. We’ve partnered with North Tabor, brought in more volunteers, and reduced the cost of drop boxes, so it’s turned out to be pretty successful. We’ve done it for a couple of years now and we’re planning to do it next year too!