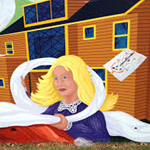 A Permanent Landmark for Community-Building 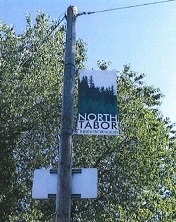 Building off the success of these first two projects, the NTNA is now moving forward with the next phase in their Neighborhood Identity Project, a Community Mural. I had the opportunity to meet with Christin Huja and Gail Morris, the mural project coordinators, last week to chat about the development of the mural to date and the lessons they’ve learned throughout this process. We met at the Laurelhurst Café, directly across from the future mural- the large wall on the northwest corner of NE 47th Avenue and E Burnside Street.

After finding the right location and getting permission for the site, Christin and Gail began writing articles in the North Tabor News and held their first public mural meeting in March 2012. They attended the Rules and Regulations for Creating Murals in the City of Portland training, which they found to be hugely helpful in navigating the permitting process, and planned to apply for the Regional Arts and Culture Council (RACC) Mural grant last summer. According to Christin, “Gail and I really wanted to get the mural started, but quickly realized we didn’t have the mass of people supporting the project to really get it going. We decided to postpone painting until summer ’13 instead. “ In an effort to get more interest from neighbors, they wrote several more articles & tabled at community events.

After these efforts, they felt more confident about neighborhood support, so they decided to move forward with an application for grant funding through SE Uplift’s Neighborhood Small Grants Program and the development of a RFP process to select an artist for the mural last fall. While several artists applied, the NTNA ultimately chose to hire Spacecraft: Mission to Arts since they had experience with truly community-based mural projects. This was crucial to the NTNA, who wanted community members to have an integral role in both the design and implementation phases of the mural.

Christin and Gail worked closely with Spacecraft on the development of the mural over the winter. They learned that grant funding was received from SE Uplift in January and decided to have a community meeting on Feb 24th, but also created a survey for input before the event. They received little input initially, so the muralists created a design with lots of open space to leave room for the ideas generated at the meeting. The meeting was a huge success with so many neighbors in attendance that it was standing room only. Additionally, Christin compiled feedback she received from those who could not attend the meeting via email.

The muralists took all feedback received into account when revising their draft design, which incorporated the changes requested and included more everyday people, and historical references and landmarks. Spacecraft presented the mural, which was approved with minor changes at the NTNA March meeting. They then submitted this version to RACC on April 10th along with their application for grant funding in the amount of $10,000. Gail and Christin are anxiously awaiting word on the grant submitted to RACC, which should be received any day now!

Christin and Gail have been involved with the mural project for over a year now and have had many ups and downs thus far. I asked them what motivates them to stay involved and Christin shared the following: “The idea of a mural sounded like a LOT of work but at the same time I thought- our neighborhood could really use this. We need more opportunities to build community…The mural project has been a huge learning process. There have definitely been times I have wanted to quit…After 15 months, we finally have a community interest in our project and it is actually going to be painted this summer!”
Christin and Gail have dedicated countless hours to this project as well as other neighborhood association efforts. Gail’s desire to participate stems from the fact that her kids are grown and she has the time to give back to her local community, while Christin decided to get involved shortly after buying a home to meet neighbors and families with kids. She also “wanted to help create traditions (like the Equinox Party) and memories (like participating in painting a mural) that my daughter and her friends will look back on as they grow up.” Both saw the need to get involved and have already had such an incredible impact on their community!

Painting on the mural will begin in a few months for a projected completion at the end of August/early September and there are plenty of opportunities to get involved! A community paint schedule will be developed and posted shortly on the NTNA website. No painting experience necessary- children and families are welcome. Additionally, monetary and in-kind donations are being accepted for painting supplies and food for the mural dedication.

For more information about the mural project contact NorthTaborMuralProject@gmail.com or visit www.northtabor.org to learn about future projects, which may include a community garden or even the development of a new park. Clearly the North Tabor Neighborhood Association is building steam, so stay tuned for more great community ­projects!