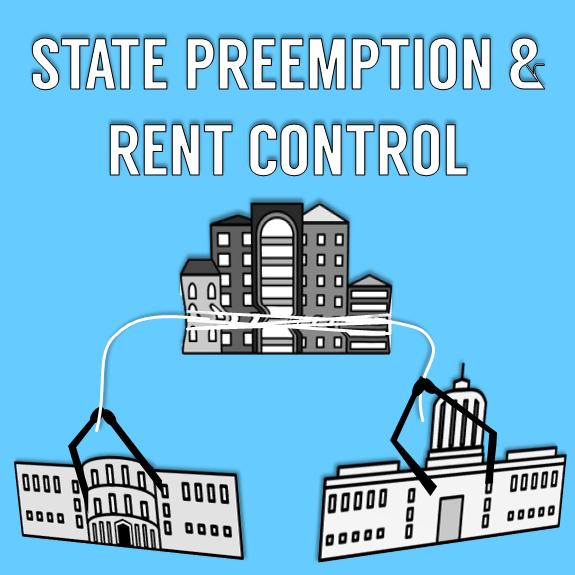 This past summer we discussed the issue of preemption in relation to the 2016 passage of Oregon Senate Bill 1533, which lifted the state ban on inclusionary zoning.

As a refresher: State preemption occurs when state law is used to nullify or prohibit a municipal ordinance or authority. Preemption is essentially the principle that state law trumps local regulation, just as federal law supersedes state law.  State preemption prevents local communities from implementing their own rules on issues that the state has specifically barred them from doing.

In our current Legislative session, preemption is again front and center on issues relating to housing affordability and tenant protections. But this time the fight is focused on Oregon’s preemption on rent control.


WHY HOUSING AFFORDABILITY IS STILL OUR BIGGEST ISSUE

Before we dive into the details of rent control, it’s important to backup and reminder ourselves why we are even having this conversation in the first place. 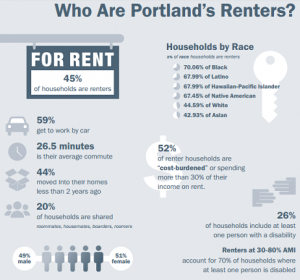 The average rent in Portland has increased nearly 30 percent since 2012.  Additionally, the benefits of new high-earning jobs entering the Portland area have not been distributed evenly. In fact,  compared to 2000, homeowners are getting richer, while renters are getting poorer.  A similar trend is mirrored in the income disparities between White households and Communities of Color. While the median income for White households of $57,000 is higher than inflation adjusted income levels in 2000, the median income for Black households, Native American households, and Hawaiian-Pacific households is around $27,000, and lower than income levels in the year 2000.

As a result rental housing has become increasingly unaffordable for a large portion of the population and has disproportionately impacted low-income residents, Communities of Color, seniors, and individuals with disabilities

It is against this backdrop of rapidly rising rents, unevenly distributed wage gains, and the displacement of our most diverse and vulnerable communities, that rent control is being actively discussed.

As outlined in the Bureau of Housing’s 2016 State of Housing Report, the City of Portland has explored and passed a number of strategies to combat homelessness and address housing affordability, but additional strategies are still needed. The ability to curb rent increases is seen as one such important tool for local jurisdictions to attack this issue by proponents like the Oregon Housing Alliance.

Rent control is complicated and it takes different forms. But the basic idea is that it protects tenants by imposing limits on what landlords can charge.

Three proposed bills are currently going through the Oregon Legislature; HB 2004, HB 2003, and HB 2001, which propose repealing the statewide prohibition on city and county ordinances regulating rents.  While HB 2004, is far more comprehensive, all would restore local control to implement rent stabilization or control policies, allowing individual communities the flexibility to design policies that meet their unique needs.

H.B. 2004 — Bans no-cause evictions of long-term tenants in most cases unless a landlord is converting a home to non-residential use, needs to perform repairs that will make the unit uninhabitable, intends to have a family member move into the unit, plans to demolish it, or is selling the property to someone who intends to live in it.  In such cases, the landlord would have to pay the tenant one month’s rent to help cover relocation costs. The bill also repeal the state’s ban on rent control with a few conditions.

H.B. 2003 — Repeals Oregon’s ban on rent control and leaves all other details to local jurisdictions.

H.B. 2001 — Repeals Oregon’s ban on rent control and imposes a moratorium on rent increases greater than five percent until July 1, 2018, with some exceptions.

Rent control can be a scary concept for folks who took Econ101 and learned that such control can limit supply, discourage investment in current housing stock, and result in discrimination by landlords. Landlords may fear they will not be able to cover costs as taxes and cost of living increase.  However, the reality is that rent stabilization policies can vary widely and there are pros and cons to it as there are pros and cons to any action or inaction we take as a society. Below is a collection of reasons why experts in the fields of policy, economics, real estate, tenant protections and more support and oppose rent control and stabilization policies, collected from a number of news articles.

Why People Support it.

Why People have Concerns.

While the pros and cons for each side have been experienced in cities and states across the nation, it all depends on the policy that is put into place. Tight restrictions can exist under state law and greatly limit rent increases, while other jurisdictions can operate under local guidelines and be far less restrictive or protective. The point is that there are lessons to be learned from other jurisdictions and both HB 2004, 2003, and 2001 would allow for that debate to happen in our City.

The State of Housing in Portland report is an annual publication that provides stakeholders and policymakers with a comprehensive, real-time look at the state of Portland’s housing market by geography, housing type, and the relative affordability to Portlanders based on their income, household composition, race, and ethnicity.

Other Housing Affordability and Tenant Protection Bills: There are a number of other proposed bills related to housing and tenant protections worth reviewing on the Oregon Legislative Information System (OLIS), which include: