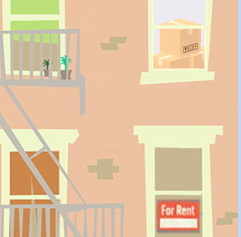 SE Uplift most recently wrote about the numerous housing initiative in our community last September. Since then many things have happened (ex: increased tenant protections through HB 4143, increased TIF set aside for affordable housing, and the inclusionary zoning ban overturned), but instead of detailing those victories, rehashing the dire state of housing, or arguing for or against any policy, this article aims to connect you with five high-priority initiatives organizing right now. We encourage interested neighbors to follow and participate in these important conversations highlighted below.

In March 2016, the Oregon Legislature passed SB 1533, which allows cities to use inclusionary zoning for the first time. As you may recall, prior to this law, local municipalities in Oregon couldn’t enact any policies that required new developments to feature affordable housing because the practice was banned outright in state law.

With the passage of this law and the lifting of the ban, the Portland Housing Bureau is undertaking a process to develop an Inclusionary Housing program for Portland.  The Bureau plans to present recommendations for an ordinance requiring affordable housing in exchange for certain benefits to developers to Portland City Council in fall 2016. A panel of housing experts, including housing developers and representatives from OPAL Environmental Justice Oregon, Coalition of Communities of Color, and 1,000 Friends of Oregon, will help develop recommendations. The groups at the table are working to strike a balance between creating a meaningful amount of new, below-market-rate units while keeping costs low so new development remains economically feasible.

In addition to keeping informed by attending public meetings of the panel of housing experts, community members can expect to be invited to participate through at least 3 community-wide public meetings this summer (exact dates TBD – sign up for the mailing list for updates). 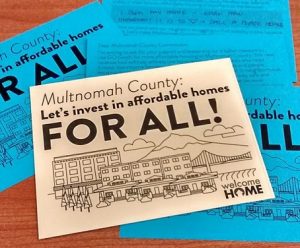 The Welcome Home Coalition is organizing a campaign for the November 2016 Multnomah County ballot, which will ask voters to fund general obligation bonds for affordable housing for people who make between 0-30% of median family income. General obligation bonds have served as a successful tool for building community infrastructure such as schools, bridges and parks. They can also be used to build new, deeply affordable housing for very low-income residents and acquire existing multi-family buildings to improve and keep affordable.

If the measure passes, it will create thousands of affordable homes for those who need them most: seniors, families, children, people who have been historically displaced from their communities, people with disabilities and people experiencing homelessness.

The details behind the initiative and campaign (#Yes2affordablehomes) are still being determined but will likely be announced in the coming weeks. Follow the Welcome Home Coalition on Facebook and Twitter to be the first to find out more about this measure.

One of the more contentious issues housing advocates are working on right now is called “missing middle” housing. Housing coalitions like Portland for Everyone and Oregon Opportunity Network are urging the city through their Residential Infill Project to create areas in neighborhoods that contain more variety (in size, density and price) than Portland’s current zoning model. The Missing Middle proposal would create zoning that allows for the construction of housing that sits in the “middle” between single-family neighborhoods and large multi-story apartment buildings, such as duplexes, triplexes, row houses, and small apartments.

Starting on June 13th, City Council and Bureau of Planning and Sustainability staff will be seeking public feedback on the spectrum of scenarios developed by the Residential Infill Project Stakeholder Advisory Committee for what types of “missing middle” housing should be allowed and where it should be located. There will also be a second round of public engagement in 2017 once code is developed. 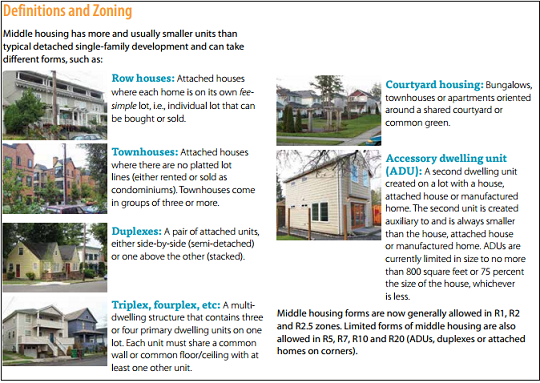 In Oregon, tenants on a month-to-month lease, or nearing the end of a long-term lease can be forced to leave their rental even if they have not violated their rental agreement and have been paying their rent on time every month. In Portland, landlords only need to give 90-days’ written notice when raising rents by 5 percent or more, or when evicting residents without cause, and don’t have to reveal their motive for the eviction.

The unwavering voices of groups like Community Alliance of Tenants and Portland Tenants United influenced Portland’s mayor-elect, Ted Wheeler, to make a campaign promise to end the practice, despite a likely legal challenge. Their efforts were recently further bolstered by City Club of Portland agreeing with them in their housing report.

You can expect the bulk of advocacy on this issue to take place at the state level. After a just-cause evictions component was removed from HB 4143 during this past short session, House Speaker Tina Kotek promised that overturning the state law banning rent control and restrictions on evictions would be back on the table during the 2017 State Legislative Session. Groups like Oregon Housing Alliance will likely be at the helm of that effort.

On May 24, 2016 Commissioner Dan Saltzman unveiled a proposal for a one percent construction excise tax (e.g. a tax on new buildings and improvements to existing buildings) on residential and commercial construction in the city to fund affordable housing. 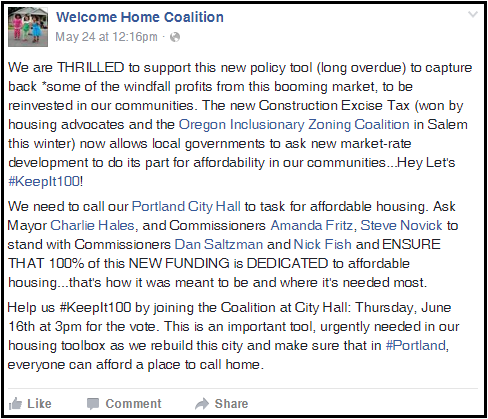 Under a newly created state law, which struck down the previous ban on construction excise taxes, a number of construction types wouldn’t have to pay the tax, including affordable housing, public improvements, and improvements to private schools, hospitals, and religious facilities. The proposal put forward by Commissioner Saltzman would also exempt accessory dwelling units for two years and construction improvements valued at less than $100,000.

The other key requirement of that state law is that 100% of construction tax revenues from residential buildings and 50% of revenue from commercial buildings must be set aside for housing programs. This leaves the remaining 50% of funds from commercial construction potentially up for grabs. Saltzman’s proposal calls for claiming these remaining funds for affordable housing.

A hearing on the proposal before Portland City Council is tentatively scheduled for June 16. Housing advocates like the Welcome Home Coalition encouraging community members to show their support for the proposal by writing, calling, and showing up at the hearing.