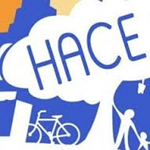 HACE: Creating an EcoDistrict from the Bottom Up

Can a partnership between business and neighborhood associations create an EcoDistrict on a shoestring budget and without city oversight? A group of like-minded activists in Southeast Portland seem to think so and with notable success in their first year, they just might be right!

The Hawthorne Area Civic Ecology (HACE) project was launched in February 2012 by the Hawthorne Boulevard Business Association (HBBA) in partnership with the Division/Clinton Business Association, the Belmont Area Business Association, the Central Eastside Industrial Council, and the five adjacent neighborhood associations: Mount Tabor, Hosford-Abernethy, Buckman, Sunnyside, and Richmond. Under the dutiful tutelage and leadership of Michele Machado, the project aims to increase sustainable business practices, promote cross-neighborhood cooperation, and to better integrate our local systems for managing our resources. 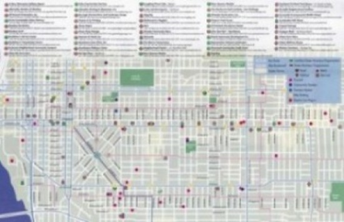 Building on the solid foundation provided by these community workshops, the HACE team has organized and supported several initiatives including: a Sustainable Southeast Map that highlights local green businesses and sustainable resources in the area, exporting the Abernethy’s garden classroom model to other schools, neighborhood Welcome Kits, and workshops on how to become certified as a sustainable business.

SE Uplift: What motivated you to get involved with this project?

Roger: A deep and abiding dedication to sustainable building and business practices.

Callie: In the spring of 2012, I was keeping my eyes open for groups that deal with civic engagement and the equity of neighborhoods. I was on a neighborhood association list-serve and saw an announcement for a meeting about civic ecology. So I attended it, essentially crashing the party! As I learned more and attended a few of the HACE workshops last spring, I soon realized that this is the stuff that I love to be involved with. I have stayed involved because of a few things; I am passionate about using my graphic design and systems thinking skills to help people, I deeply care about social equity issues, and I love being engaged in my community and getting to know my neighbors.

Why is volunteering important to you?

Linda: I guess it started because I never had that perfect job where I was paid to work toward the goals I most believed in so I’d end up volunteering around the edges to help accomplish other things.  I was raised to always try to be aware of the struggles of other groups and that makes it hard not to want to lend a hand.  And when I moved to Portland where I only knew 3 other people, volunteering was a great way to meet some wonderful people.

Roger: I’m often reminded of a saying from my Jaycee (United States Junior Chamber) days, “Service to humanity is the best work of life.” and to me, this is what volunteering is all about.

Callie: I believe that volunteering is an inherent part of human nature. It’s about getting involved in your community, getting to know your neighbors and working for the greater good. It’s also about establishing one’s sense of place and belonging, which almost all humans need to some extent.

What advice would you give others trying to organize a similar effort, especially one that involves collaboration between neighborhood and businesses groups?

Linda: In trying to coordinate an effort with so many moving parts, we could accomplish much more if we had enough funding to hire even a part time staff person to do some coordination. There is so much happening in this part of the city in regard to sustainability and so much opportunity if only we had the person power to connect more of the dots among our partners. The other caveat would be to choose a name for your effort with great care so that all the groups you hope to work with feel immediate ownership of the project.  We’ve had some problems because we have Hawthorne in our name which makes some folks think it’s only about the Boulevard.

Roger: Just Do It!  Surround yourself with effective leaders and JUST DO IT!

Callie: Establish an understanding of how the group will simultaneously work together and separately right at the beginning. It seems easier if the group identifies several projects, as was done with HACE, and gets volunteers right away to take one under their wing and run with it. This kind of ownership allows an individual or small team to work on what they are most passionate about.

What is one thing you would like readers to know about the project?

Linda: We have a great core team and are looking forward to growing the project in ways that will create a new synergy to address the priorities the community (businesses and neighborhoods) identifies.  To really address climate change and create a healthier planet we need both (top down) programs that are initiated at the federal, state and city level as well as projects that local groups initiate at the grassroots level (bottom up).  HACE intends to create a new bottom up model that emphasizes collaboration.

Roger: The effectiveness of sustainability rests at the roots of everyday life: How and why we live. Please be part of the solution because the alternative is truly not sustainable.

Callie: We need you!!! Everyone has something to offer, that’s why it’s called ‘civic ecology;’ we are all a part of the system of our community by virtue of living here.

To find out more about HACE and to get involved email eco@thinkhawthorne.com