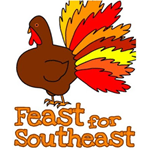 An organization is only as vibrant as its participant’s enthusiasm.

Beginning a decade ago as a mere thought, Rob Selva, Founder and Director of Feast for Southeast, felt driven to find a way to “share [his] resources with those less fortunate.” Sitting in a friend’s living room seven weeks before Thanksgiving in 2010, he shared his dream with others. “I always thought this would be a better way to express gratitude than enjoying our own ‘feast.’ Whether that meant buying a turkey and giving it to someone, preparing a meal for a family in need, or volunteering at a local community event – I knew I wanted to make an impact!”

Inspired by the idea; Selva, his wife, and a handful of enthusiastic friends set out to host a community meal only seven short weeks later. 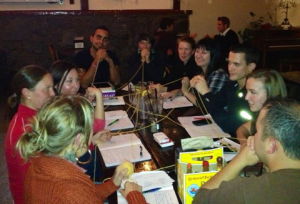 The first year of Feast for Southeast was held at the Mt. Scott Community Center, as have the subsequent Feasts. Selva said that he “went to the Mt. Scott Community Center to propose [the] idea and they said yes!  Then we met with some nonprofit organizations that serve families in the area.  We wanted to find out if there truly was a need for this and also enlist communication partners to help us get the word out so that folks would come.  We also worked with all the [nearby] neighborhood associations – they were critical communication partners and supporters. The communication partners served two purposes – getting folks to come to the event and spreading the word about an awesome volunteer opportunity.”

Selva and friends leveraged support from friends, colleagues and business connections. Selva was amazed by the willingness to participate he and his team encountered when reaching out to Oregon Culinary Institute, Great Harvest Bread Company and Warner Pacific College to name a few. “Support was overwhelming.  Carol and I kept saying ‘this is really happening!’” 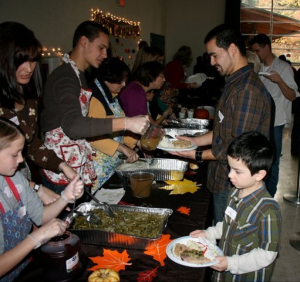 Feast for Southeast is working hard to host the group’s third meal, with an anticipated 400 guests, this coming Thanksgiving. The original core group of six people has expanded to a team of fourteen committed volunteers. Now, as the official Director of Feast for Southeast, Selva joyfully shares that he surrounds himself with “passionate and very talented people.  The team that’s come together is very strong, we are finding ways to expand the original dream.” The core group of volunteers are Selva’s wife, Carol, who serves as the Co-Founder and Consultant; Louisa Lakos, Co-Director; Robert Lucas and Rebekah Mende, Canvassing Coordinators; Sam Coy and Tom Vice, Hospitality Coordinators; Megan Coy and Josh Hobson, in charge of food and beverage; Kendall and Mike Palmer, in charge of decorations; Danielle Newman and Jaime Gallagher; Volunteer Coordinators and Maria Holmes, who manages the group’s social media.

The volunteer list is much longer than the core group listed above and the list of dedicated partners is long and continues to grow.

What is it about a community meal that is so appealing?

“I’ve thought so much about this,” Selva said. “I started out with the goal to feed the homeless. That was about 10 years ago. Then with the way our community’s been affected by the economy, when it came time to actually hold the first Feast for Southeast, it was more about providing a festive meal and welcoming environment for anyone in less-fortunate circumstances. This quickly evolved to a true community-building event.  People from all walks of life, who might normally never talk to one another, share a holiday meal and festive vibe during a time when folks are more open to connecting with others. It’s magical – what happens.”

Selva’s enthusiasm is contagious. Louisa Lakos, Co-Director of Feast for Southeast, joyfully describes participating with Feast as incredibly fulfilling. She shares Selva’s sense of magic – when community members can sit together regardless of and inspired by their individual stories and break bread together. She describes Feast for Southeast as “for the community by the community.”

In its third year now, Feast for Southeast is wholly dependent on the kindness of others. Not currently incorporated, Feast seeks out funding and in-kind donations to ensure that the meal can continue with the expectation of feeding more people each year. For two years, Feast for Southeast has been a grant recipient of SE Uplift’s Neighborhood Small Grants Program, and a perfect example of a project that builds community, sustains participation, and serves a myriad of people from every background imaginable. As well, Feast for Southeast has been incredibly successful in establishing community partnerships – which is what Sleva’s dream has been built upon.

Currently, Feast for Southeast is seeking volunteers to help get the word out about the meal. Feast hosted canvassing parties through out October and will host a few more – the first three Saturdays in November on the 3rd, 11th and 17th. Feast hopes to have about twenty volunteers for these canvassing parties which serve as outreach to nearby neighbors who the group hopes will share in the meal prepared the day of the event by the Oregon Culinary Institute. 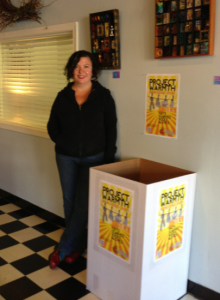 Lakos explains that the food offered at Feast for Southeast is “fresh and prepared with a sense of gratitude.” This is part of the message volunteers aim to get out to the community. Feast for Southeast is not only a meal for people who may be hungry; it is a community celebration where neighbors share food, stories and gratitude for the opportunity to come together in such a spirited way.

As if hosting a meal wasn’t gift enough, Feast for Southeast expanded its generosity last year with two additional programs: Project Warmth (formerly known as Socks for Southeast) and Project Toy Box (formerly known as Toys for Southeast). Project Warmth takes donations of new and unused socks, hats, scarves and gloves and offers them to members of our community who want or need them. And Project Toy Box collects new and slightly used toys for children of families who share in the feast.

The impact of these two projects has been heartwarming. Silva recalls last year a mother, who brought her daughter to volunteer with her, coming up to him at the end of the meal and to say “because of Toys for Southeast, my daughter learned a huge lesson about giving that I could not have done by myself.” He described the moment as “moving” and it solidified for him the powerful impact Feast for Southeast has on the community.

To learn more about Feast for Southeast, and how you can be part of creating a vibrant meal, visit: www.feast4southeast.com.