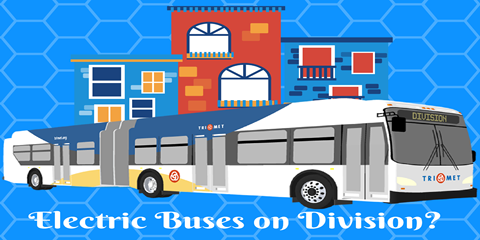 Portlanders have long enjoyed the benefits of all-electric public transit options. MAX Light Rail, Portland Streetcar, and Portland Aerial Tram all bring smooth, quiet, zero-emissions rides to our streets and skyline. Now with the Division Transit Project scheduled to replace the Line 4 bus service from downtown Gresham to downtown Portland in 2021, many in the corridor are looking for the new buses to be zero-emissions as well. Electric buses are quieter than diesel, have no tailpipe emissions and result in significantly fewer carbon emissions. In comparison, a fleet of thirty-three sixty-foot diesel buses, running 14 hours a day on Division, would add roughly 15 tons of CO2 to the atmosphere every day.

In August, the SE Uplift board approved a letter to TriMet asking the agency to commit to battery-electric buses for the Division route, joining similar calls from the South Tabor, Richmond, Sunnyside, and Hosford-Abernathy neighborhood associations. In response, TriMet agreed to give monthly electric bus updates at meetings of the project’s Community Advisory Committee. The agency also hired the nonprofit Center for Transportation and the Environment (CTE) to study the Division route in detail to see what it would take to put electric buses in service. That analysis should be complete in late October with a summary report available in November.

In October, more than sixty representatives of transit agencies, local governments, and utilities participated in a zero-emissions bus showcase hosted by King County Metro in Seattle. Attendees including TriMet staff and Multnomah County Commissioner Jessica Vega Pederson came from around the region and country to test-ride electric buses, kick the tires, see the chargers, and learn from others who are transitioning to zero-emissions fleets.

There was wide agreement among presenters that as battery technology improves, costs will come down (diesel buses are still cheaper to purchase than electric buses, which close the gap over time in fuel and maintenance savings). For now, transit agencies either pay the premium up front or finance the difference. Finding ways to lower the initial cost will be important for the Division Transit Project, which has a hard budget cap of $175 million to spend on all aspects of the project, including buses, stations, garage updates, property acquisition, and more.

Other considerations discussed at the showcase included partnering with utilities to secure reliable power, creating backup systems for outages, working with manufacturers on standardizing charging equipment and customizing offerings, and reducing risk by requiring robust warranties on newer technology.

How soon to zero?

Many localities are eager to take on these challenges in return for the benefits. As the City of Portland and Multnomah County commit to being carbon neutral by 2050, TriMet can play a large role in meeting those goals both by providing reliable transit and — as the state’s largest consumer of diesel fuel — by transitioning its vehicles off fossil fuels.

The agency has been considering electric buses for the Division Transit Project since as early as 2015 when electric bus manufacturer BYD brought a demonstration bus to town. In 2016, TriMet was awarded a federal grant to purchase five 40′ battery-electric buses, and in partnership with CTE plans to deploy them on Line 62 on the west side sometime next year.

TriMet is not alone in seeing battery-electrics as the industry’s future. King County Metro has committed to purchasing only electric buses from this point forward as it replaces its aging diesel buses, prioritizing communities that face disproportionate air pollution and health impacts. The Indianapolis Public Transportation Corporation (IndyGo) has been running electric buses for years and has made a similar commitment to end the use of diesel. That agency has three bus rapid transit (BRT) projects in the works, all of which will use 60′ battery-electric buses.

Whether the Division Transit Project will bring similar buses to Portland’s east side in 2021 should be decided by the summer of 2018.

John Carr serves on the board of the South Tabor Neighborhood Association and represents SE Uplift on the Division Transit Project Community Advisory Committee.