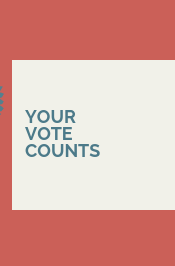 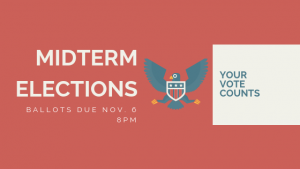 We are a week away from Oregon midterm elections! Halloween is over, don’t let the “Spooky SZN” (Spooky Season) continue– vote your conscience! Midterm elections, as we have previously discussed here, have historically a much lower turnout compared to presidential elections. A lack of voter turnout can allow extreme measures to pass and getting out the vote is an important part of democracy.

I’ve been volunteering in politics in some capacity since 2010, mostly in voter registration. While doing this work,I have heard nearly every single reason why people don’t register to vote, or don’t vote even when they are registered. Here is what I have heard:

Let’s break those myths! Here are some of my thoughts about those excuses folx offer, and why I recommend you VOTE this election cycle.

“My vote doesn’t count,” and “I only vote in the presidential elections.”

These statements touch on the feeling that your single vote won’t make the desired change needed to see big impacts. Although this might ring true for presidential elections where your vote actually chooses your state’s electoral votes, for local/state measures and candidates every vote is counted individually and directly determines election wins and losses. Despite this fact, there is a paradox with some folks who only want to vote during the US presidential election. Your vote matters, especially now!

“X branch of govt. gets nothing done, my vote won’t change that.” and “I don’t like X candidate but I also don’t like the other candidate Y so I won’t vote.”

This is one of the most dangerous mental spaces potential voters can be in for any election, in my opinion. This is the same perspective many folx expressed two years ago during the last presidential election, which has led to some of the most divisive actions we’ve seen in my lifetime. People forget that not voting can result in a vote for something you oppose.

“I’m not political, and don’t care about it.”
“I don’t see how this affects me or people in my life.”

“The information is confusing and I don’t feel educated enough.”

This is extremely common! Many people feel this way. Also, midterm elections are underplayed in the media, and information regarding candidates and measures are often hard to find. We still need to make an effort to talk to one another, communicate with organizations that are doing elections work and interact with your precinct canvassers. Many trusted groups made voter guides that we can use to guide our vote. SE Uplift even has a voter information lounge where you can come get info about the issues!

Although voting isn’t everything we can do to create positive change in our communities, as discussed in the last SE Uplift newsletter, it is still an essential part of making our voices heard. Why wouldn’t we use every tool we have to make the changes we want to see?

Come by SE Uplift any M-TH 1:00-4:00 to our Lounge and Learn to fill out your ballot. We have resources available so you can vote with a solid understanding of the issues and candidates.

C’mon folx, let’s vote! Spooky SZN is over, let’s get our community out to vote.