Collaboration at Board Retreat 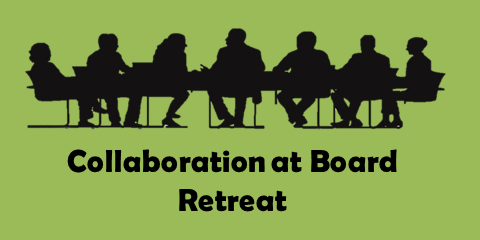 On September 23rd, nearly twenty Southeast Uplift board members spent the morning learning about the history and mission of Southeast Uplift, and we explored some of the ways the current board could help participate in and realize the work that SE Uplift does. Molly Mayo, SE Uplift’s Executive Director, started us off with a review of Southeast Uplift’s beginnings, mission, and evolution to the present. She discussed the Office of Neighborhood Involvement grant agreement requirements, which include Outreach & Communication, Organizational & Advocacy Support, Training & Skill Building, managing the Neighborhood Small Grants Program, and several more.  Although SE Uplift is one of seven Neighborhood Coalitions, it actually predates the neighborhood system and the City Bureau now called the Office of Neighborhood Involvement (ONI) by a few years. Southeast Uplift’s basic goal is to help foster communities that are livable, safe, socially diverse, and vital.

The next activity, to which we returned again at the conclusion, was examining the language in our mission statement. We brainstormed in small groups about the ways the mission statement reflects where we see Southeast Uplift today, and where it could be improved, reporting back to the whole group about what we had discussed. And at the end of the morning, we were invited to spend a few minutes reflecting on the earlier discussion and to experiment with different language for updating the mission statement. After displaying the results on the wall we put stickers on the ones that seemed to capture best the enthusiasm for tweaking this statement in anticipation of working on a Strategic Plan.

We then split into four parallel sessions led by various members of the Executive Committee to discuss (a) Community Agreements, (b) Fundraising, (c) Community Involvement, and (d) Local Issues people are concerned about. Although some participants commented in an online evaluation that the sessions were a bit rushed, the conversations in those meetings suggested both an appetite for the subject matter and an interest in pursuing or deepening our understanding of these further. Stay tuned for more on these topics in the near future.

Other feedback from the retreat, captured by the online survey, included the following:  “Very much appreciated the time management and the activities to encourage collaboration. This retreat increased institutional knowledge and group cohesiveness.” Another response mentioned valuing “meeting new people, breaking out into small groups, how organized it was, keeping discussions brief, no pressure to make decisions, engage in conversation and brainstorming, the respectfulness of participants.”

We wrapped up with a delicious potluck in the Fireside Room. Everyone brought yummy dishes and we even had some left over that the next group to meet in that space appreciated. And it is hard to go wrong when you get to eat together as a way to conclude an event. Thank you all who attended, and especially to Molly for the work that went into preparing it.