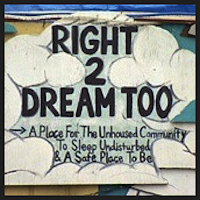 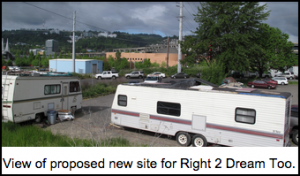 It has now been 34 days since it was first publicly announced that the City was considering moving Right 2 Dream Too to surplus ODOT property located within the Central Eastside Industrial District at the intersection of Southeast Third Avenue and Harrison Street. Since then, SE Uplift, Hosford-Abernethy Neighborhood District Association (HAND), and the Central Eastside Industrial Council (CEIC) have hosted several meetings with a variety of SE-area constituents on the topic.

Below you will find a brief recap of how we got here, information on where things stand now, and the answers to  some of the most common questions and concerns we have heard.

How We Got Here

Right 2 Dream Too (R2DToo) was established roughly three and a half years ago on a vacant lot at Northwest Fourth Avenue and West Burnside. The structured overnight tent sleeping area was created both to provide people experiencing homelessness the opportunity to get a good night’s rest and as a protest to the City’s anti-camping rules.

In January 2012, the Portland Bureau of Development Services (BDS) began fining both R2DToo and the property owners for violating city code by operating an “unpermitted recreational park campground.” This prompted R2DToo to file a lawsuit against the City.

When Commissioner Fritz became the commissioner in charge of BDS in 2013, she brokered a deal that waived the fines, ended the lawsuit against the City, and R2DToo agreed to move from Burnside to a parking lot owned by the Portland Development Commission beneath the Broadway Bridge’s Lovejoy ramp.

Due to pressure from neighbors and developers in the area, the City instead sold the property to said developers and agreed to dedicate an additional $846,000 from the developers to find R2DToo a different home.

In October 2014, the Portland Development Commission made an agreement to purchase the property where R2DToo is currently located for 1.5 million, with the stipulation that R2DToo vacate the property within 30 months (by October 2016).

It has been over 15 months since the City started searching for a new location for the rest area. The hot real estate market has made the task of finding R2DToo a new home – one that is within budget ($850,000), large enough, zoned properly, within two miles of the central city, has minimal impact on neighbors and the neighborhood, and has good access to transportation –  a big challenge.

The Portland City Council was originally expected to vote on the proposed purchase of the land in late May, however the timeline has been pushed back due to a Phase 2 Environmental Site Assessment needing to be completed. A new date for City Council consideration has not been set.

Both Commissioner Fritz and R2DToo representatives will be present at SE Uplift’s upcoming board meeting on June 1st.

Q. Has SE Uplift taken a position on this issue?

A. No, SE Uplift has not taken an official position on any aspect of the proposed R2DToo move. A large spectrum of opinions have been expressed by our board members in conversations thus far ranging from concerns over the lack of public involvement and the proposed site’s proximity to services, to enthusiastic support of both the organization and the proposed move.

Q. Have HAND or CEIC taken a position?

A. HAND has not taken an official position but they have been actively involved in the conversation. Although they have received a handful of concerned emails from neighbors and have expressed frustration about the lack of public involvement, in general both the board and the neighbors (or at least the ones who were present at their May meeting) appear to be generally supportive of the move or at least not in direct opposition to it.

The CEIC stands in opposition to the proposed move of R2DToo into the Central Eastside. They have asked City Council to reject the purchase of the ODOT property and instead of permitting this and future rest areas through executive power, to initiate an amendment to the City’s Code using the same public process that any other code amendment would require. Furthermore, CEIC contends that the proposed rest area cannot reasonably be classified as a “Community Service” (the reasoning provided by the City in 2013 for why it can be permitted outright) per Portland City Code and that even if it were, establishing the camp would require a building permit.

As for air pollution, R2DToo has indicated that this is not a major concern of theirs due both to their current location having significant car emissions and because homeless people are already living in this area.

The larger concern expressed by R2DToo is the potential contamination of the site since it is located next to East Side Plating, which uses some toxic chemicals in their plating process. The Phase 2 Environmental Site Assessment should determine if the site is safe for use as a rest area.

A. Both the City and R2DToo acknowledge that the proposed site is not as close to services as they would prefer. The City is confident that through partnership development, this hurdle can be overcome.

Q. Is the City planning 20 of these rest areas?

A. Although there have been reports of City officials originally mentioning they wanted to see 20 rest areas in Portland, they have now made clear there are no current plans for any additional rest areas at this time. However, if this one goes well, they will likely explore more locations, including somewhere near the Springwater Corridor.

Q. What about the public process?

A. According to the Mayor’s office, the City did not approach neighbors about the site until they knew it was a viable option. This meant that they waited to contact CEIC and HAND representatives til they received the valuation of the property.

Although the City appears to be operating under an interpretation that the proposed rest area is permitted outright in the EXd zoning, and therefore won’t require land use or design review and the associated public input, they have stated they are interested in working with neighbors to facilitate the best outcome.

Q. How does this help solve our homelessness problem?

A. While providing people with a safe place to get a good night’s rest does not directly get people into housing, it does provide a basic human need and  may lead to people being more capable of accessing the resources they need to get off the streets. Portland has a large houseless population and due in part to a lack of affordable housing, it will take a significant amount of time to solve this issue. In the meantime, rest areas like R2DToo can provide a safe refuge from the harsh realities of homelessness.

Additionally according to the City, A Home for Everyone (a collaboration of regional governments and service providers focused on homelessness) has recommended rest areas as part of the larger solution.