The Saga of the Street Fee 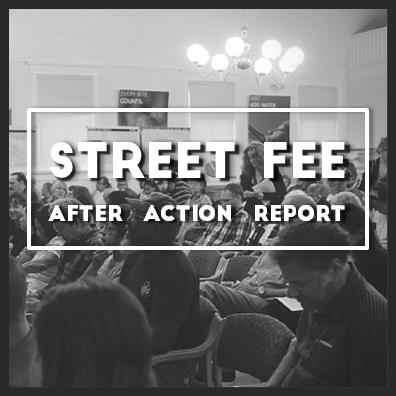 The Saga of the Street Fee
An After Action Report

by Robert McCullough, President SE Uplift Board of Directors

SE Uplift did not take a position on the street fee; however, we did agree it should go to the voters for approval. Additionally, SE Uplift had questions regarding how the fees were calculated and requested the work papers explaining the calculations, which are public under Oregon Public Document law.

Unfortunately, the promised calculations were not provided by the Portland Bureau of Transportation or Commissioner Novick’s office. Finally, fifty days after we requested them and we were forced to file in court, we received three small spreadsheets that indicated that there were many errors in the calculations.  Our review, presented to the city council, was well received by the mayor and other commissioners.

The roadblocks we experienced accessing basic, public records while we researched this issue – are troubling. The $2,562.32 in fees the City of Portland imposed upon us were set at a level likely to discourage most neighborhood associations from making any such requests – not to mention, most Coalitions. Our intent – to understand the underlying mechanisms by which the fees were calculated – was fair and reasonable and therefor the difficulties we experienced making this attempt – doubly concerning. There is a larger conversation currently gaining steam in this state on public transparency and access to public documents. We are planning the steps set out in the Oregon open documents law to seek a refund.  SE Uplift will continue to follow this issue, and there will be a role for us to play in this discussion.

In the meantime, we are most grateful to all our supporters who donated funds to help cover this expense. As we move forward with our advocacy efforts on this and other issues of importance to our neighborhoods, we want to thank you all for all your help – everything adds up and everyone who raises their voice in stewardship of their neighborhood plays a critical role in the future of our beautiful city.

The street fee has now been put on hold but the story is not over. The streets still need to be repaired. Gasoline taxes have not kept pace with inflation and the backlog of serious street maintenance problems left by previous city administrations is real, and will continue to grow worse – this time on our watch – without a commensurately serious plan to find the funds to address them.

Moreover, this episode has reaffirmed SE Uplift’s position that the highest standard of public involvement and transparency is necessary to move any issue from problem to best possible solution. Any new proposal must include the widest possible public discussion, backed by the best possible public data – data that can withstand full dissection by a skeptical, engaged electorate – before it comes to the voters. Transparency is a must. Good decisions are not made in dimly lit back rooms.

We plan to join in any ongoing discussions in 2015, so, please do join us.