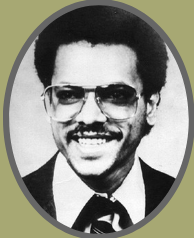 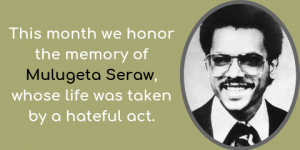 (SE Uplift has partnered with Urban League to sponsor commemorative sign caps that will be put at multiple intersections in the Kerns, Laurelhurst, and Sunnyside neighborhoods to honor Seraw. His murder occurred at SE 30th and Pine in SE Portland. The sign caps will be unveiled in mid-November. -Molly Mayo, SE Uplift Executive Director)

There are many untold stories of Black immigrants who face racism, discrimination and hate in the United States. The story of Mulugeta Seraw (Mo͞o-lo͞o-ɡāt-ah sə-rou) is one of them. Mulugeta was a 28-year old Ethiopian college student living in Portland, Oregon who was murdered by members of a Neo-Nazi gang called East Side White Pride Skin Heads on November 13th, 1988. The Urban League is spearheading a project to honor Mulugeta and tell his story as a young Black immigrant whose life was taken too early by a senseless act of racist hate violence.

Mulugeta came to the United States in November 1980 and lived with his uncle in a small apartment in Suburban Beaverton, Oregon.  After working at a fast-food restaurant and then at Beaverton Catholic Elementary School, in 1986, he took a job as a bus driver for Avis at the Portland Airport. On November 12th 1988, Mulugeta was out with his Ethiopian friends to watch football and say farewell to a friend who was visiting from Philadelphia. As Mulugeta’s friends were dropping him at his apartment, Ken Mieske, a member of East Side White Pride Skin Heads attacked Mulugeta repeatedly with a baseball bat. After Mulugeta was taken to the hospital for treatment, he passed on November 13th, 1988 at the age of 28. The perpetrator pled guilty to first-degree murder of Mulugeta Seraw and affirmed that, “on November 13th, 1988, I unlawfully and intentionally killed Mulugeta Seraw because of his race.”  He was sentenced to life in prison and died in 2011 in prison.

The Urban League of Portland is organizing a 30th year commemoration event to honor Mulugeta’s memory in a meaningful way, engaging with the Ethiopian community. Under the leadership of the Urban League, a planning workgroup comprised of volunteer leaders from different interested Community Based Organizations, coalitions, local government and others will implement this project.

The main event for the commemoration day, Tuesday November 13th, 2018 is a half day conference, which includes panel discussions, community training and guest speaker. The conference will take place on November 13th, 9:00 AM – 1:00 PM at Portland State University.  Mulugeta’s immediate family members, his friends, lawyers who litigated the case and guest speakers will participate at this half-day conference.