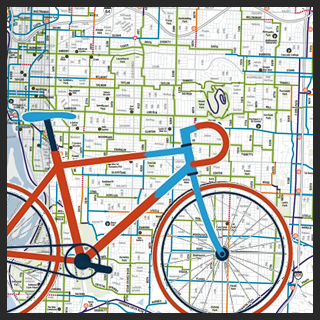 World Class Bikeways and the Future of SE Portland


By: Terry Dublinski-Milton
North Tabor NA Transportation and Land Use Chair, SE Uplift Board Director at Large, BikeloudPDX Member.
The opinions and ideas in this article are the writer’s, and do not necessarily reflect the position of the Board of Directors of SE Uplift. 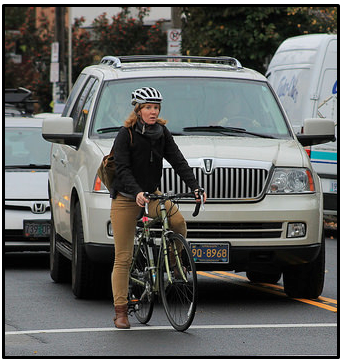 Portland is rapidly growing with density coming to us all, yet our bike mode share (share of total trips taken by bike) has stagnated since 2008 at just over 6%. What has come with higher density is increased roadway demands, as more people try to get around in the same space. If we want to avoid the congestion of neighboring cities to the north and south, we are going to have to increase the capacity of our streets either by widening them, which isn’t going to happen, or by moving more people using less space (think biking, walking, and public transport).

Increasing bicycling ridership is vital to maintaining and improving our city’s livability. The Portland Plan and the Portland Bicycle Plan both embrace this need by calling for 25% of all trips to be made by bicycle by 2030-2035.

To reach these goals we will need to expand and improve our bikeway network citywide. If we do not prioritize bicycle infrastructure investments in both connectivity and safety as we grow, we will be inundated with more traffic, more accidents, and more conflicts. The almost fatal truck-bike collision in front of Cleveland High School on Mother’s Day 2015 and the even more recent death at the intersection of Gladstone and Caesar Chavez illustrate that what we currently have in place often isn’t good enough and that we face the double task of improving our existing infrastructure, while also developing new routes.

Transportation in general is not a zero-sum-game, in that projects that help bikes can also help pedestrians and drivers. However, the funding pie is limited and the needs are huge. If we are going to reach our bike mode share goals, we – as individuals, as a coalition, and as a community – need to advocate for more funding. We must increase the pie!

SE Uplift has almost 25% of the city’s population and is growing fast.  According to a recent Oregonian article, 7 of the top 10 bike-car conflict collision roadways are in SE Uplift. In addition to advocating for increased bicycle infrastructure funding, we must make sure that the significant problem spots and infrastructure gaps within the SE Uplift coalition area are addressed.

Unlike projects focused on our high crash corridors and busy arterial streets like Powell or 82nd Ave, which to make safe for all modes would require difficult decisions on costs, capacity, and parking, the bikeway-based projects below would create safer intersections and shared streets in an affordable manner. In most cases, these bikeways also serve as a safe route to school, which we all want.

The low-cost, high-benefit projects below are just a few active transportation corridors I believe are worth advocating for.


Clinton Street is one of Portland’s oldest and most well-established bikeways. Unfortunately this once lauded and always popular bicycle route is troubled by safety and equity issues. Parts of Clinton handle over THREE times the number of vehicles daily than they should according to national standards for auto counts on bike boulevards. Previously this wasn’t as much of a problem because there were big gaps where bikes could move to the side. 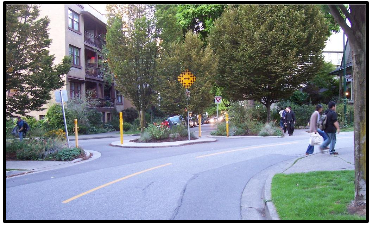 Now that Division St is a trendy destination, visitors are increasingly parking on Clinton and drivers are using Clinton as a convenient (few stop signs) cut-through during peak commute times. This has created dangerous conditions for bicycles as drivers try to pass without adequate space to do so safely. To reduce conflict and modernize this critical bikeway, I believe the City  should install diverters that would direct cars back to the arterials (see more under the 20’s Bikeway).

To the west there is the Tilikum Crossing, a world class active transportation bridge, yet to the east the Clinton-Woodward bikeway ends in gravel with no residential connection to the Green Line Division MAX station or I 205 path.   Completing Clinton-Woodward, MAX to MAX, would create a central residential safety corridor for all of SE Uplift which would physically show we really do care about equity, while we connect SE Uplift including the forgotten “Middle East” of Portland between 60th and I 205 together.  This would be good for all of us.

The 20’s Bikeway – a 9.1-mile route that goes from Lombard Avenue in the north to the Springwater Corridor in the south – is funded for this fall.  Here we have a rare opportunity to build in a fix to Clinton:  engineer diversion near 28th on Clinton as part of this bikeway.  This small improvement on the 20’s bikeway, which connects Hosford Middle and Cleveland High Schools, would solve two problems at once: creating a safe, low traffic, north-south bicycling corridor while concurrently creating safer conditions on this stretch of Clinton through traffic reduction.   This is just one possible improvement, but working together SE Uplift, neighbors, businesses, and neighborhood associations can help make sure the 20’s Bikeway is a genuine world class bike facility. 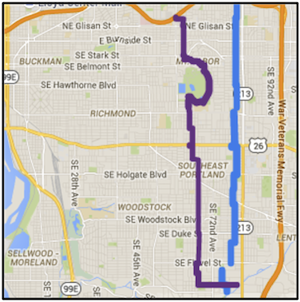 There currently is a large gap in our north-south bikeway network that spans the SE Uplift coalition area between the 50s and I205. Over the past months, I have worked with neighborhood associations and individuals to network the “Middle East” of Portland into a series of priority bikeways including the 60’s from the 60th MAX station to the Springwater via Mount Tabor Park and 80th from Madison High School south into Brentwood-Darlington.  These have been endorsed by a number of neighborhood associations and are on the planning maps, but we need to  call on City Hall to get them built.   Each of these bikeways cross Clinton-Woodward and will integrate nicely into the 2016 SE Foster Roadway safety modernization, thus supporting this growing commercial corridor.

To see an example of what can be done, come join me and city planners as I lead a Pedalpalooza ride to envision and build momentum for the 80th bikeway connecting Madison High School with Cartlandia!